Why The FBI Shouldn’t Take A Knee, But Did: Concerns Mount Over FBI’s Role In Protests 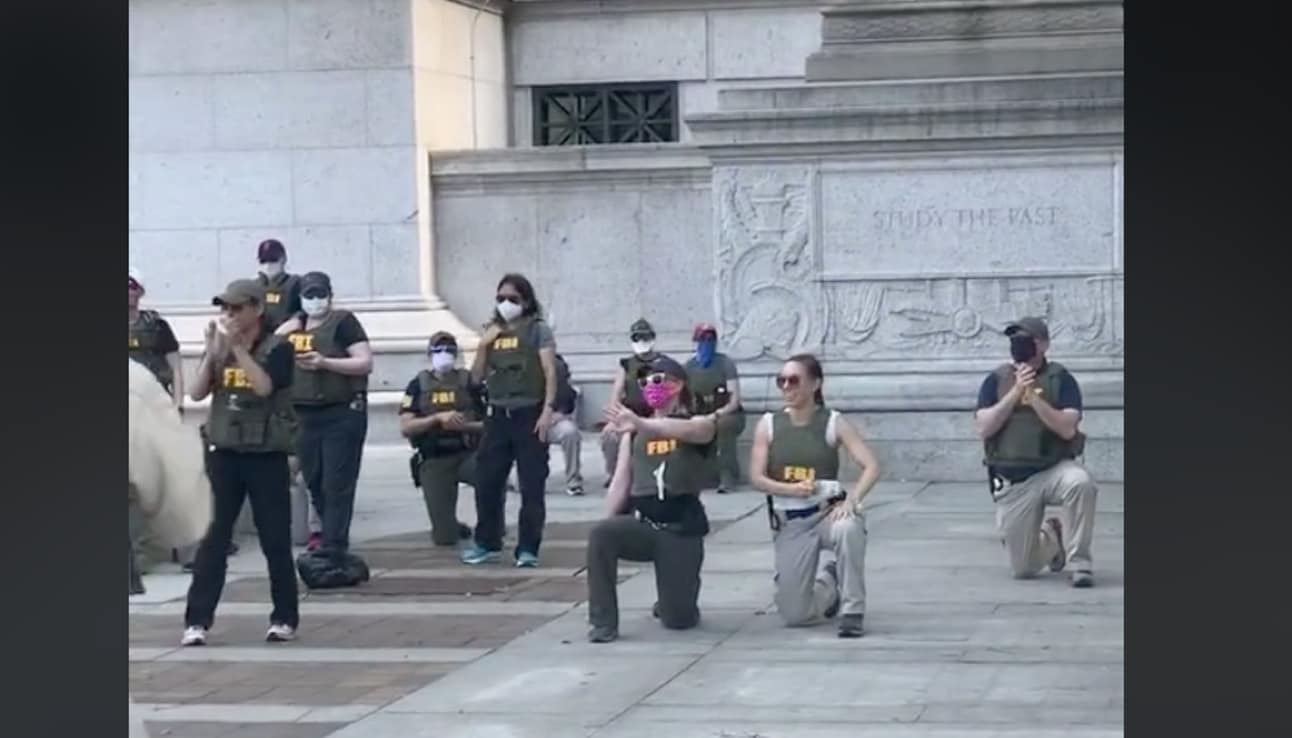 Since President Trump’s speech on Monday night in the White House Rose Garden before he walked over to St. John’s Church in Lafayette Square, Attorney General William Barr has been intimately involved in the government’s response to protestors in Washington, DC.

His directive was to deploy a large number of the 500 FBI Washington Field Office’s (WFO) Special Agents ‘in small to medium groups to patrol the areas most affected as a “show of force.”

This story reflects the concerns among FBI special agents in the field about being put in a situation that could readily create more harm than good. And as Washington D.C. gets ready for its eighth day of protests this Saturday, with hundreds of thousands expected to march down to Lafayette Square, the city’s law enforcement is hoping for the best but prepared for the worst.

According to an FBI official, who spoke on the condition of anonymity, “Barr has been a consistent presence in the Washington Field Office’s Command and Tactical Operations Center (CTOC), where he has been directly overseeing the operations to deploy law enforcement and military forces around the city to combat protestors.”

There are numerous issues with the deployment of FBI special agents to work on crowd control issues. One example occurred several days ago and was recorded in a TikTok video that showed 10-15 FBI Special Agents, patrol the streets in Washington D.C. Those agents were confronted with a much larger group of protestors who asked the special agents to “take a knee.”

The FBI special agents did just that. All of them.

Without knowing what the Special Agents were thinking, their personal belief system, nor their political opinions, what option did they have but to take a knee, said a source familiar with the incident.

“It is unlikely that they would have incited violence had they not kneeled – but they did not know that for sure.  And, were they willing to risk their lives, and the lives of those protestors who could have been injured or killed if violence escalated,” questioned a retired senior FBI agent who spoke to this reporter.

Inside the Tactical Operations Center, the tensions are also high, as Barr and FBI Director Christopher Wray have had numerous disagreements with the use of FBI agents out in the field, noted the source.

Unlike the Metropolitan Police Department of Washington, DC, the FBI does not have a “Quick Response Force” capability if some of their patrolling Special Agents were to run into a dangerous scenario that required additional resources.

This was evident earlier this week when a group of Special Agents were deployed to Lafayette Square and, as the protests increased in size and changed location, they were essentially stranded for over 6 hours.

The FBI’s Deadly Force Policy, located here, purposely does not include any reference to a “use of force continuum”.  The Deadly Force Policy is the governing guidance that all FBI Special Agents adhere to during operations.  Without proper training in riot control tactics and the equipment with which to do so, the only default that these Special Agents have is contained in the words of the policy: “FBI special agents may use deadly force only when necessary – when the agent has a reasonable belief that the subject of such force poses an imminent danger of death or serious physical injury to the agent or another person.”

When you have a small group of armed law enforcement officers, greatly outnumbered by protestors, it only takes a few violent acts (typically undertaken by agent provocateurs, Antifa, criminals, etc) before law enforcement will respond.  When you have no other option at your disposal other than lethal ammunition in your assigned service weapon, the consequences will be deadly.

Moreover, law enforcement officials say is the larger issue with “FBI Special Agents patrolling the streets at the behest of the Attorney General is that this will forever complicate and diminish the FBI’s most crucial function – Color of Law investigations.”

According to the FBI’s website, “The FBI is the lead federal agency for investigating color of law violations, which include acts carried out by government officials operating both within and beyond the limits of their lawful authority…Those violations include…Excessive force: In making arrests, maintaining order, and defending life…Violations of federal law occur when it can be shown that they force used was willfully “unreasonable” or “excessive”.

So while the FBI is patrolling the streets, “and potentially facing situations where they will be presented with no option but to use excessive force due to their lack of training and equipment, the entire organization will be tainted when it comes to investigating others,” a senior former law enforcement source said.

More importantly, the FBI, which is currently investigating those officers charged with George Floyd’s death, must remain “above the fray” in order to see things objectively and without bias.

However, when you now have video of FBI Special Agents taking a knee in solidarity with protestors protesting against the police charged with Floyd’s death, the perception of objectivity is now completely gone.

Any shrewd defense attorney for the officers in question or future officials charged with Color of Law violations will be able to simply point to this video and say that the organization and its representatives carry an impartial bias against law enforcement officers.

According to a former FBI official familiar with Color of Law investigations, “it is not the Special Agent’s job to express solidarity or ‘take sides’ with either the victim or the suspect.  It is their job to perform an investigation to determine facts, corroborate or refute statements, and present a finding to prosecutors.  If an Agent carries a bias toward one side or another the system will not work.  The FBI must keep its people out of what is directly happening on the streets and focus on what is happening in incidents where excessive force type violations may have happened.  The FBI is not trained to deal with protests, riots, or civil unrest. Period.”

The same former official added “the fact that Special Agents were out patrolling the streets is indicative of the same systemic leadership failures within the FBI that have allowed so many egregious things to happen within the organization over the last decade.  Although the FBI Director reports to the Attorney General and serves at the pleasure of the President, he must advocate for maintaining the integrity of his organization and stand up for what is right.  This responsibility doesn’t just sit with the Director.  Anyone who is serving as in a leadership position in the FBI must do the same.”