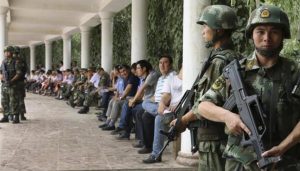 Instead of challenging China over its treatment of the Uyghur minority, the World Bank has just approved a grant of $50 Million for the Government of China, so they can invest in Xinjiang Uyghur Autonomous Region.

The “objective” of the Xinjiang Technical and Vocational Education and Training Project is to improve the quality and relevance of project schools to produce students’ skills that respond to the labor market demand in Xinjiang.

(i) strengthen the linkage between schools and industry;

(iv) improve external support to other schools and local communities; and

Chinese government is facing growing international pressure about the internment camps that are imprisoning more than a million Uyghurs.

It has been reported that China is also forcibly sterilising women held in its vast network of “re-education” camps which house political and religious prisoners, survivors have claimed.

One woman, who was held for more than a year, has told French television that she was repeatedly injected with a substance by doctors in a prison in the far-west region of Xinjiang.

“We had to stick our arms out through a small opening in the door,” Gulbahar Jalilova, a 54-year-old former detainee, told France 24.

“We soon realised that after our injections that we didn’t get our periods any more.”

In July, the Chinese government released a white paper on Xinjiang which claimed that Uyghurs are not Turkic people. The white paper defends the internment camps system. From Xinhua:

China released a white paper on vocational education and training in Xinjiang Friday.

The question is why would the World Bank, the most prominent world wide financiancial insitution provide the Chinese government with a grant of $50 Million for this region? How would this investment qualify as good investment?

Here is a project document obtained by SaraACarter.Com: