Who Will Investigate the FBI and DOJ Top Secret Leaks to the Media? 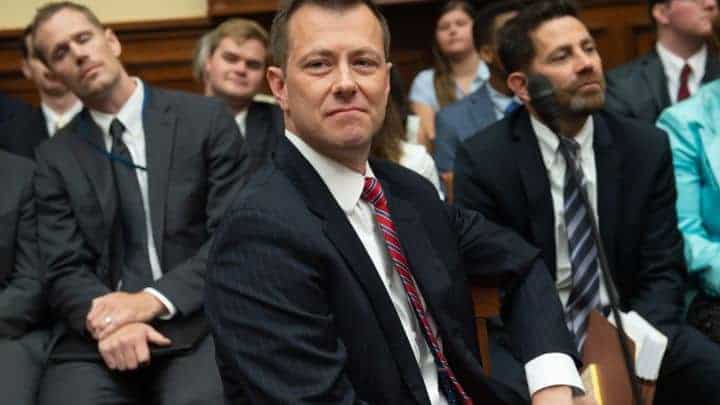 The text messages, coupled with numerous stories that have leaked over the past several years by anonymous “law enforcement and U.S. officials,” reveal an ongoing pattern of communication between FBI and DOJ officials and the media. This pattern–according to lawmakers–must be investigated by the Department of Justice.

Republicans say the Strzok and Page texts released last week reveal an effort to shape the narrative on the bureau’s Russia investigation into President Trump’s campaign, as well as build a platform, which the FBI would use as evidence in an effort to interview more campaign officials, say congressional officials. Democrats say the texts are being taken out of context, however, evidence continues to mount and suggests otherwise.

“The most troubling aspect of these continuing revelations is that we’re seeing more and more evidence of what was once a widespread culture of leaking amongst senior officials at the FBI and DOJ,” Rep. Mark Meadows (R-NC) told SaraACarter.com. Meadows sits on the House Oversight and Government Reform Committee and chairs the Freedom Caucus.

“That evidence is not only deeply concerning, but should raise serious questions about the impartiality of these investigations and whether those in charge followed protocol in other areas,” he said.

Department of Justice spokesperson Sarah Isgur Flores told SaraACarter.com, “The department does not confirm or deny the existence of investigations.” However, Attorney General Jeff Sessions already revealed last year that Utah U.S. Attorney John Huber was picked to lead an internal Justice Department investigation into the FBI’s handling of the case, as well as leaks.

Evidence that the FBI was communicating with the media in early 2016 was also stressed in DOJ Inspector General (IG) Micahel Horowitz  June report.

“We have profound concerns about the volume and extent of unauthorized media contacts by FBI personnel that we have uncovered during our review,”  Horowitz’s 568-page report stated.

The recent Strzok and Page texts appear to have narrowed the playing field of leakers.

In one particular text message written by Strzok to Page on January 10, 2017, he refers to a CNN story disclosing that then President-elect Trump and President Obama were briefed on the unverified dossier compiled by ex-British intelligence operative Christopher Steele. Strzok suggests the story can be used as a “pretext” to conduct interviews with ‘some people’. It was the first time the unverified dossier was given validity and several days later, BuzzFeed published the full dossier online.

“Sitting with Bill watching CNN. A TON more out,” Strzok texted Page on January 10, 2017, as first reported Friday by CNN. “Hey let me know when you can talk. We’re discussing whether, now that this is out, we use it as a pretext to go interview some people.'” The term “pretext,” in counterintelligence investigations is applied when the bureau is questioning a person without divulging the true reason for the interview because of its classification or other issues connected to the investigation.

Early this year, the House Intelligence Committee’s Russia report alluded to overwhelming evidence that former Director of National Intelligence James Clapper may have been the source for the CNN leak. Several months later, Clapper was hired by CNN as a paid contributor.

Since the start of the House Intelligence Committee investigation, “the Committee majority and minority agreed to four parameters for this investigation, covering Russian active measures directed against the 2016 election and against our European allies, the U.S. Government’s response to those attacks, links between Russians and the Trump and Clinton campaigns, and leaks of classified information.”

The same month The Post story was published, former FBI Director James Comey signed the third reauthorization to monitor Page’s communications. Comey reauthorized the warrant just as bureau and DOJ officials were allegedly leaking the classified information to The Post. Then in June, former Deputy Director Andrew McCabe and current DOJ Deputy Attorney General Rod Rosenstein signed off on the fourth and final FISA renewal on Page that would last until September, 2017. McCabe was fired early this year after DOJ Inspector General Michael Horowitz, who is now investigating the bureau’s handling of the Russia investigation, released a damning report on McCabe that revealed he lied to DOJ investigators and leaked information to the media during his tenure at the FBI.

In May, 2018, the Washington Post was also first to report–with extraordinary detail–the story titled, “Secret FBI source for Russia investigation met with three Trump advisers during the presidential campaign.” This story is vaguely sourced, suggesting U.S. intelligence officials warned that publishing Stefan Halper’s name — the FBI source discussed in the story — at the time would endanger his life or others. A week later, a number of media outlets discovered through simple deduction based on the description provided to The Post by ‘several people familiar with the matter’  that in fact, the FBI source was Halper.

“It is a felony to leak top secret classified information and one of the most secretive documents is a Foreign Intelligence Surveillance Act warrant against an American citizen in a counterintelligence investigation and those who leak the information could be sentenced to a maximum of ten years in prison,” said a former Senior U.S. intelligence official, who asked for condition of anonymity due to their current employment.

“But that’s exactly what bureau officials, as well as possibly DOJ officials, did when the story on Carter Page was published in the Washington Post for example,” said the official. “It is a huge abuse of power, as well as the fact that the information in the FISA was also based on unproven and false allegations.”

As stated in the Cornell Law School website: According to 18 U.S. Code 798 “whoever knowingly and willfully communicates, furnishes, transmits, or otherwise makes available to an unauthorized person, or publishes, or uses in any manner prejudicial to the safety or interest of the United States or for the benefit of any foreign government to the detriment of the United States any classified information—

Shall be fined under this title or imprisoned not more than ten years, or both.”

Criminal and civil rights attorney, David Schoen tells SaraACarter.com that by definition, FISC warrant applications involve classified matters or classified information and that the FISC has very strict rules for those involved in cases.

“The FISC’s own rules are very stringent about each person in any way involved with filing or reviewing the application having security clearance and it provides for in camera proceedings expressly to prevent disclosure,” he said.

Numerous congressional committees have spent nearly two years investigating the matter with back and forth backroom fighting behind closed doors in Washington D.C. between the lawmakers and the Department of Justice. Last week’s text drop was no different and immediately, Congressman Meadows began receiving pushback from senior Democrats after the Republican lawmaker asked Deputy Attorney General Rod Rosenstein to investigate the texts, which revealed the former FBI agents were communicating with multiple news organizations including the New York Times and Washington Post.

“Our review of these new documents raises grave concerns regarding an apparent systemic culture of media leaking by high-ranking officials at FBI and DOJ,” said Rep. Meadows.

The congressman said that the evidence collected by the committee displays a significant “media leak strategy” by the FBI officials. Shortly after the information went public, Democrats Reps. Elijah Cummings of Maryland and Jerrold Nadler of New York, both serving on the same committee, accused Meadows of misinterpreting the text messages and taking them out of context.

It is a Democrat talking point “that doesn’t hold much water,” said a congressional official, with knowledge of the investigation.