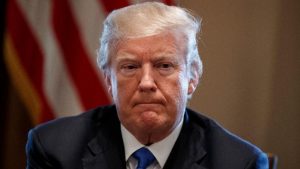 The White House is speaking out after a doctored video circulated social media over the weekend depicting President Trump shooting, stabbing journalists and political opponents. The video, first reported by The New York Times was shown at a pro-Trump event at his resort in Miami last week.

A spokesman for the Trump campaign however, told The Times, “That video was not produced by the campaign, and we do not condone violence.” The event organizer said in a statement that his organization “rejects” the content. Moreover, they are reviewing the matter.

Over the weekend, many other news media organizations featured in the clip expressed similar condemnation. The White House Correspondents Association was “horrified” by the video, according to a statement released on Twitter Sunday.

CNN, which was featured in the video as one of The President’s victims, wrote, “Sadly this is not the first time that supporters of the President have promoted violence against the media in a video they apparently find entertaining- but it is by far and away the worst.” Further, the network urged widespread “condemnation” including from “The President and his family, the White House, and the Trump campaign.”

The video also showed President Trump knocking out the late Senator John McCain. His wife said in a statement, “Reports describing a violent video played at a Trump campaign event in which images of reporters & John McCain are being slain by President Trump violate every norm our society expects from its leaders & the institutions that bare their names. I stand with the WHCA in registering my outrage.”

Reports describing a violent video played at a Trump Campaign event in which images of reporters & @JohnMcCain are being slain by Pres Trump violate every norm our society expects from its leaders& the institutions that bare their names. I stand w/ @whca in registering my outrage