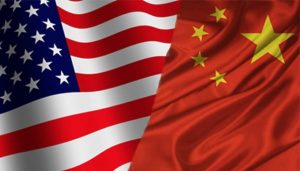 The first U.S.-China meeting under the Biden administration got off to a tense start in Anchorage, Alaska on Thursday, with both sides exchanging a slew of insults and accusations.

A planned four-minute photo session for the officials to address reporters ended up lasting one hour and 15 minutes due to the exchange. Reporters were told not to leave as both sides wanted to add their rebuttals.

In his opening remarks, Blinken said the U.S, would discuss its “deep concerns with actions by China, including in Xinjiang, Hong Kong, Taiwan, cyber attacks on the United States, economic coercion of our allies.”

“Each of these actions threaten the rules-based order that maintains global stability. That’s why they’re not merely internal matters, and why we feel an obligation to raise these issues here today,” Blinken said. “I said that the United States relationship with China will be competitive where it should be, collaborative where it can be, adversarial where it must be.”

Yang also slammed the U.S. for using its “military force and financial hegemony to carry out long-arm jurisdiction and suppress other countries,” according to an official translation reported by NBC.

A top Chinese official then criticized the U.S.’s weak democracy, citing police brutality and systemic racism that led to mass protests in the U.S. last summer.

“We do not seek conflict, but we welcome stiff competition, and we will always stand up for our principles, for our people and for our friends,” said Sullivan, saying earlier that they will raise “frankly, directly and with clarity … the concerns on the minds of the American people” and shared by “our allies and partners in the broader international community.”

Yang said the U.S. must deal with the Chinese side in “the right way” and reiterated Beijing’s call for cooperation.

“We believe that it is important for the United States to change its own image, and to stop advancing its own democracy in the rest of the world,” Yang said.

A senior U.S. official told reporters during a briefing Tuesday night that “it’s good that we’re opening up these channels of communication.”

“This is very much about sitting down, getting an understanding of each other, and then taking that back and taking stock,” a second official added.

The second round of discussions is set for Friday.