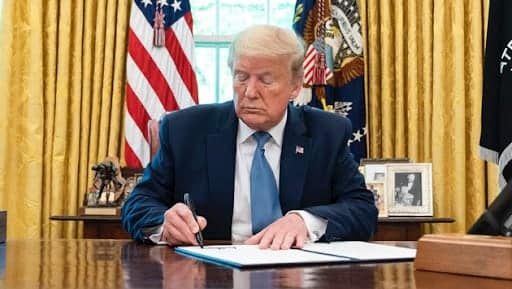 President Donald Trump signed his executive order Thursday telling the nation from the Oval Office that “we’re here today to defend free speech from one of the greatest dangers.”

That danger to free speech emanated directly from Silicon Valley tech companies that certainly appear to have two sets of rules for monitoring people on their platforms. That mainly included one set of rules for conservatives and another set of very lax rules for liberals. These companies also appeared more concerned with everything Trump was doing on the platform and have paid little attention to dictators and communist governments with agendas targeting their own populations and freedom.

Something had to be done and it was only a matter of time before the White House made the move to fight back. It happened this week and it couldn’t have been soon enough.

The actions taken by the administration may not be perfect but they were absolutely necessary to put these tech giants in check.

There are many examples of the two-tiered monitoring system used by the Silicon Valley platforms. This isn’t just about shadow banning complaints from conservatives or for that matter targeting conservative stories on Facebook as #FakeNews through third party arbiters that they hire to regulate the platform information process. It’s what they’ve failed to do when communist governments, like China, or the cult like Iranian regime target their own populations with lies and spread hate throughout the globe.

For example, the Chinese Communist Party promoted a conspiracy theory Tweet on Thursday saying that that the U.S. military was responsible for the coronavirus outbreak in Wuhan: ‘It might be US Army who brought the epidemic to Wuhan,’ said Zhao Lijian, a Ministry of Foreign Affairs spokesman.”

In another instance, Google actually worked on a search engine for the Chinese Communist Party so it could surveil its people. The Intercept published an incredible story showing how Google assisted the CCP in blacklisting people and aided in gross ‘human rights’ violations.

“Google built a prototype of a censored search engine for China that links users’ searches to their personal phone numbers, thus making it easier for the Chinese government to monitor people’s queries, The Intercept can reveal. The search engine, codenamed Dragonfly, was designed for Android devices, and would remove content deemed sensitive by China’s ruling Communist Party regime, such as information about political dissidents, free speech, democracy, human rights, and peaceful protest.”

In Hong Kong, China has used Twitter and Facebook to spread lies to undermine pro-democracy protests. I have the fortune of knowing human rights activist Andy Chan, who founded the Hong Kong National Party, and has been targeted by the Chinese Communist Party on multiple occasions. He’s being nominated for the Nobel Peace Prize but continually lives in fear of China’s control over Hong Kong.

These are just some of the issues that have shown the divide between how these social media platforms use the issue of fact checking for their own political bias. Think about the recent Tweet from D list comedian Kathy Griffin, who threatened Trump on Twitter saying “Syringe with nothing but air inside it would do the trick. F— TRUMP.”

The Washington Examiner, which first reported the Tweet, said “in medical procedures, air accidentally injected into the body’s bloodstream through syringes or IVs can cause air embolisms, which can be fatal.”

Trump admitted that his executive order would more than likely lead to a court battle and he expects it to, he said. I understand his point that if the social media companies are not put in check heir power will only grow stronger and their ability to infringe both on people’s liberty and freedom of speech greater.

It was refreshing to see Department of Justice Attorney General Bill Barr standing along side Trump as the Executive Order was signed. This order may one day allow federal regulators to fine Facebook, Google, Twitter and other social media platforms that operate more like publishers than platforms for free speech. At question is Section 230 of the Communications Decency Act, which was enacted in 1996 and signed into legislation by then President Bill Clinton. It was enacted to regulate pornography, as well as offensive communication content. Even though, it was seen as unconstitutional it was never abandoned but instead, adopted by “interactive computer service” that gives immunity from most lawsuits to tech companies from information posted on their platforms.

Barr said on Thursday that the DOJ is looking to draft legislation to alter Section 230 of the Communications Decency Act, taking away the immunity shield from tech companies that act as publishers and monitor free speech. It will be interesting to see how the section is altered to avoid any backlash from the courts.

Silicon Valley media giants, like Jack Dorsey, CEO of Twitter, went on his platform Thursday to attempt to quell the continuing divide between the administration and his platform after fact checkers put a disclaimer on President Trump’s tweets Wednesday regarding the dangers of  California’s decision to distribute mail in voting ballots for the 2020 election.

“Fact check: there is someone ultimately accountable for our actions as a company, and that’s me,” said Dorsey. “Please leave our employees out of this. We’ll continue to point our incorrect or disputed information about elections globally. And we will admit and own any mistakes we make.”

Dorsey was referring more than likely to news reports that outed anti-Trump employee Yoel Roth, Twitter’s head of site integrity, whose department is set up to monitor Twitter accounts.

Fact check: there is someone ultimately accountable for our actions as a company, and that’s me. Please leave our employees out of this. We’ll continue to point out incorrect or disputed information about elections globally. And we will admit to and own any mistakes we make.

White House Spokesperson Kayleigh McEnany told referred to Roth earlier during the day at the White House press conference  saying “Twitter’s head of site integrity has tweeted that there are ‘actual Nazi’s in the White House.’ And no fact check label was ever applied to this absolutely outrageous, offensive, and false claim made against the White House and its employees.”

“No one believes in the First Amendment more than the President,” she added. “The President will take action to ensure that big tech does not stifle free speech and that the rights of all Americans to speak, tweet, and post are protected.”

That’s exactly what should be happening now. These platforms became a global phenomenon because they insisted that people would not be under the thumb of government but be free to speak their minds.

What they never said is that they would be arbiter of what is acceptable so-called ‘free speech.’