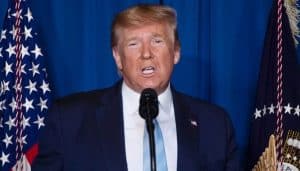 Former President Donald Trump is returning to social media. Only this time, it will be on his terms. Adviser Jason Miller revealed the plans on Fox News, saying his boss will be back on social media in a matter of months. Trump will reemerge on his own platform, Miller added.

Miller said the move will “redefine the game.”

“I do think that we’re going to see President Trump returning to social media in probably about two or three months here, with his own platform,” Miller said.

“And this is something that I think will be the hottest ticket in social media, it’s going to completely redefine the game, and everybody is going to be waiting and watching to see what exactly President Trump does,” he added.

“This new platform is going to be big,” Miller said, predicting the site may draw “tens of millions” of users.

Miller also told Fox News Trump will continue to issue endorsements of candidates across the country, including one to be announced Monday.

“Pay attention to Georgia tomorrow, on Monday. There’s a big endorsement that’s coming that’s going to really shake things up in the political landscape in Georgia. It’s big, it’s coming tomorrow, and just be sure to tune in,” Miller said.