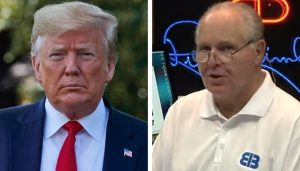 “I am thrilled to announce that our commander-in-chief President Donald Trump will be right here tomorrow hosting the largest virtual rally in radio history,” said the veteran conservative talk radio host during his Thursday episode. “Be sure to tune in you don’t want to miss this. It will be special.”

This comes after President Trump declined to participate in a virtual town hall debate with former Vice President Joe Biden, saying, “I’m not wasting my time on a virtual debate.”