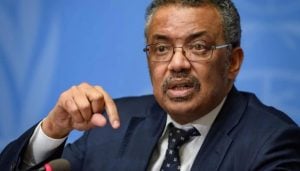 United States President Donald Trump revealed a letter Monday night that he sent to World Health Organization Director-General Dr. Tedros Adhanom Ghebreyesus laying out a timeline of the WHO’s missteps in combatting the COVID-19 pandemic. It also addressed the differences in how the organization treated China, where the virus originated, compared to how it treated the U.S.

Trump warned Dr. Tedros that he would freeze U.S. funding to the W.H.O., an agency of the U.N., if it did not ‘demonstrate independence from China.’

This is the letter sent to Dr. Tedros of the World Health Organization. It is self-explanatory! pic.twitter.com/pF2kzPUpDv

“I cannot allow American taxpayer dollars to continue to finance an organization that, in its present state, is so clearly not serving America’s interests,” Mr. Trump’s letter read.

Pres. Trump suspended U.S. funding of the WHO last month. Prior to that move, the U.S. was the largest donor to the WHO.

Jan 23rd: @DrTedros says: "@WHO advises against the application of any travel or trade restrictions on China"#Retweet pic.twitter.com/VSxqWgBdxi

President Trump defended his decision to restrict travel from China during the early stages of the global pandemic, telling Dr. Tedros that he believed the Director-General “strongly praised China’s strict domestic travel restrictions but were inexplicably against my closing of the United States border, or the ban, with respect to people coming from China. I put the ban in place regardless of your wishes. Your political gamesmanship on this issue was deadly, as other governments, relying on your comments, delayed life-saving restrictions on travel to and from China.”

What would have happened if #Tedros & @WHO would have declared a 'Global Health Emergency' as early as 1st week of Jan 2020? Listen to the video (min 8:30)#Tedros: "WHO advises against the application of any travel or trade restrictions on China" #Retweet https://t.co/kkxSos1hL9

On a separate note – which the President did not address in his letter – Dr. Tedros Adhanom Ghebreyesus was accused in 2017 of “covering up three cholera epidemics in his home country, Ethiopia, when he was health minister.” Now, his overt support of China – the country where the coronavirus pandemic emerged – is forcing the Trump administration to reassess whether to pull U.S. funding from the organization.

President Trump ended his letter with an ultimatum for Dr. Tedros and the World Health Organization. “It is clear the repeated missteps by you and your organization in responding to the pandemic have been extremely costly for the world,” he wrote. “The only way forward for the World Health Organization is if it can actually demonstrate independence from China. My Administration has already started discussions with you on how to reform the organization. But action is needed quickly. We do not have time to waste.”

The President concluded by telling the Director-General that “if the World Health Organization does not commit to major substantive improvements within the next 30 days, I will make my temporary freeze of United States funding to the (WHO) permanent and reconsider our membership in the organization,” adding that he “cannot allow American taxpayer dollars to continue to finance an organization that, in its present state, is so clearly not serving America’s interests.”