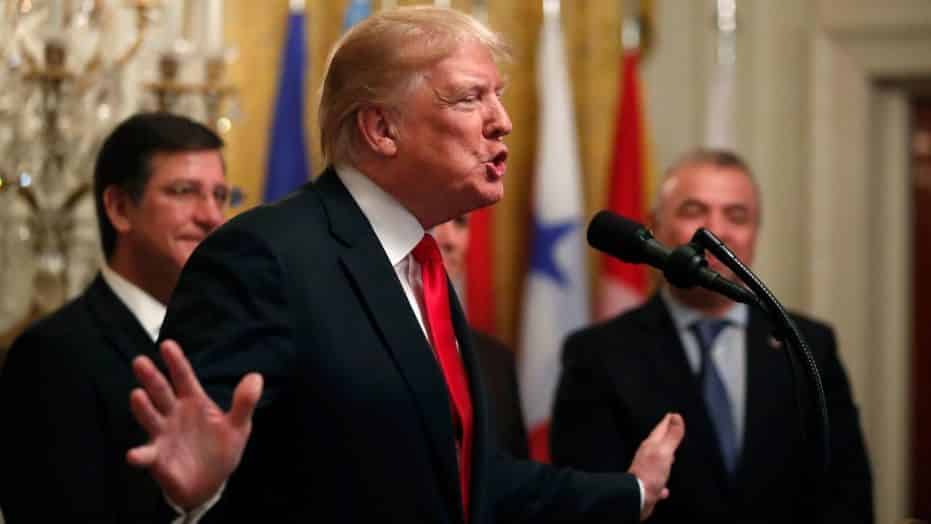 President Donald Trump said Wednesday that he is “seriously” considering declassifying a slew of documents requested by former Republican House leaders investigating the FBI’s handling of the Russia probe. Trump was pummeled with questions during a rancorous White House press briefing where he congratulated Republicans for winning Senate races and said he hoped to work with the new Democratic House leadership.

The president addressed questions regarding whether or not he would end Special Counsel Robert Mueller’s investigation, stating, “I could, I could fire everybody right now. Politically, I don’t like stopping it.”

“It’s a disgrace,” said Trump of the Special Counsel investigation. “It should have never been started because there is no crime.”

“They all have conflicts over there that are beyond anything anybody has ever seen in terms of conflicts,” he added.

"I could fire everybody right now. But I don't want to stop it. Because politically I don't like stopping it…I let it just go on. They're wasting a lot of money." https://t.co/QF15MHrJt2 pic.twitter.com/VaA3XSue50

However, after Comey’s firing, Rosenstein (under pressure from Democrats) appointed Mueller to to the Special Counsel to investigate Trump. In October, concerning information about Rosenstein surfaced during a deposition of former FBI General Counsel James Baker. Baker had told lawmakers that he met with former FBI Deputy Director Andrew McCabe and former FBI attorney Lisa Page shortly after they had a meeting with Rosenstein in May, 2017. Baker said that McCabe, Page and Rosenstein had discussed the possibility of secretly recording President Trump. Baker, who was the top lawyer for the FBI and a close confidant of Comey, noted that he was not in the meeting with Rosenstein. Baker said that Rosenstein also discussed the possibility of invoking the 25th Amendment on the president in an effort to remove him from office for being unfit.

“Comey, who by the way, lied and leaked and also leaked classified information–nothing happened there it might, perhaps, maybe something is happening that I don’t know about,” Trump said Wednesday. “But you know what I do. I let it just go on. They’re wasting a lot of money, but I let it go on…I could end it right now and say that investigation is over but… it’s a disgrace frankly, an embarrassment to our country, it’s an embarrassment to the people of our country and it’s too bad.

The president warned that he was still “seriously” considering declassifying the documents that the Republican Congress has been demanding for the past year. Lawmakers have sighted a need for transparency in the bureau’s handling of the FBI investigation into the Trump campaign.

[dropcap]I[/dropcap]n August, Trump handed over the classified documents to DOJ Inspector General Michael Horowitz for review. Trump had originally suggested that he was going to declassify them, but then suddenly changed his mind, saying he wanted to ensure that there would be no national security implications if the documents were declassified.

The documents include all documents related to DOJ official Bruce Ohr’s interviews with the FBI. Ohr, who has been demoted three times for not informing his superiors of his role in the FBI investigation, gave a deposition to Congress in August where he admitted he was used as a back channel by the FBI, so the bureau could continue to communicate with former British spy and dossier creator Christopher Steele. At the time, the FBI had terminated Steele as a confidential source when it caught him giving communicating with the media.

According to sources, the FBI Agents kept copious notes in all 12 interviews they had with Ohr. Those interviews are known in the bureau as 302 reports. Those 302s, along with the Foreign Intelligence Surveillance Act (FISA) warrant that was used to spy on short-term Trump campaign volunteer Carter Page and the “Gang of Eight” notebook on the investigation, are currently under review by Horowitz.

For months, Congress has requested that Trump declassify the documents after battling Deputy Attorney General Rod Rosenstein and FBI Director Christopher Wray to no avail. Congressional members, some whom have clearance to see the documents, say “no sources or methods” would be exposed if they were declassified, but that they believe it would expose extensive evidence of abuse by the bureau on the secretive Foreign Intelligence Surveillance Court.