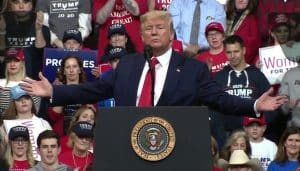 First revealed to “The Sara Carter Show” Monday, The Trump Campaign is suing in the Western District of Pennsylvania for voter integrity amid Democrats’ fight for sweeping mail-in elections to mitigate the spread of the novel coronavirus.

Jenna Ellis, a Senior Legal Advisor for the Campaign, broke the announcement on Carter’s podcast Monday.

“Election integrity should not be a partisan issue, yet Democrats are consistently trying to cheat and manipulate election rules to undermine safeguards and security around the November election,” the Ellis wrote in a statement on Monday.

She added, “President Trump is firmly committed to ensuring that every eligible person has the possibility to vote once and that Americans’ votes are not diluted by fraud in new systems Democrats are trying to hastily push on the American people.”

President @realDonaldTrump is fighting to ensure that all Americans can be confident in a free, fair, and secure election in November! pic.twitter.com/dbQ69ht8hu

The Republican National Committee launched ‘ProtectTheVote.com’ to expose and pursue the fight for election integrity across the country. And the party is gaining ground with a number of lawsuits in many states, including recently pocketing a win ruled by a Clinton-appointed judge in Florida.

Great news! A Clinton-appointed judge handed us a major victory in Florida.

Democrats sued to force counting of ballots cast *after* Election Day & prohibit the state’s ban on ballot harvesting, but the judge sided with us.

We are fighting hard to https://t.co/ImFKSGulau!