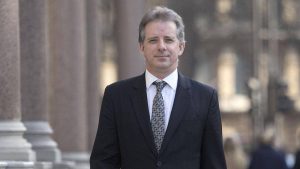 Nigel West, whose real name is Rupert Allason, is one of the most highly respected historians in the intelligence world. The British born scholar has seen the inside of Moscow’s most secret archives, has spoken to officials at CIA headquarters in Langley, Virginia and is a treasure in his home country of Great Britain.

He has an uncanny ability to debunk some of the greatest spy tales and validate those that are real with such accuracy that he’s been dubbed the ‘unofficial historian of the secret services’ throughout the world.

This week he spoke to this reporter on The Sara Carter Show podcast and revealed the discoveries he’s made in his recent analysis of former British spy Christopher Steele’s now-debunked dossier that accused President Donald Trump’s campaign and administration of conspiring with Russia.

In 2017, West, who is now 68, was commissioned by a Republican law firm to assess the accuracy and validity of Steele’s dossier. What he discovered would end his friendship with Steele, whom West had known and trusted. West’s detailed line by line study of Steele’s dossier also brought into question the validity of Steele’s previous intelligence work for the FBI. For example, West said there are now serious questions arising out of Steele’s work on FIFA in 2010, when Steele helped deliver information to the bureau about FIFA officials, which led to indictments of many current and former officials of the soccer governing body.

West said based on his analysis, the Steele dossier was ‘mainly fabricated.’

He noted that Steele’s fabrications in Trump’s dossier were not the first time the once-respected British spy lied. “I think that we will discover that the fabrications go back a long way. And if you look at the relationship between the FBI and Chris it goes back to the FIFA investigations…He left the service in 2009, went into the private sector and was hired by the British the English Football Association to do research on the Russian competition. The bid for the 2018 World Cup. Well all sorts of things happened but not quite as Chris said. And he produced two reports for the FBI at that time that now do not stand up to analysis and that’s very interesting.”

He noted that the politicization of the U.S. intelligence community is disturbing “and the two things strike me, one is that how anybody could have taken the Steele report seriously and not done a line by line analysis and notice things about it is a serious cause for concern – the lack of any attempt or validation seems to me to be close to criminal.”

“And how grown-up intelligence officers could have fallen for it or circulate it, it is to me absolutely breathtaking,” he continued. “And when you look at the tradecraft used by Chris, what also surprises me and I don’t think corruption is is too strong a word for it but not just to produce these documents but to peddle them to go round the media and peddle them and then complain to the FBI that there’s been leaks of his own information – and complained to the FBI who then eventually discovered that he was responsible for the leaks in the first place.”

As for the Russian disinformation pointed out in the recent declassification of the footnotes in DOJ Inspector General Michael Horowitz’s report may have been Sergei Millian, who is Steele’s only real identifiable source in his report. Millian, a Belarusian-American businessman, who was mentioned in former Special Counsel Robert Mueller’s report may have had ties in his early life to Russia’s GRU, Moscow’s military intelligence, by his own admission, said West.

Millian’s whereabouts are currently unknown but he is believed to be hiding in Moscow, said West. During the 2016 Trump campaign he used his non-profit, the Russian American Chamber of Commerce, to make connections to the Trump campaign but it was his conversations with Steele that led to some of the more salacious and now debunked parts of the dossier. He attempted early on to deny the claims made by Steele, saying he was an unwitting source when Steele approached him but that appears now to have been a lie.

“There does appear to have been at least one Russian source for Chris,” said West, referring to Millian. He said the problem with Millian is when you look into his background.

“He dances around the proposition that he may have himself worked for a Soviet intelligence organization,” said West. “When you look back at his career, he acknowledges publicly and is quite sort of entertained by the idea that when he did his compulsory military service for two years in the Soviet Union, he did the military interpreters course in English. And that is run by the GRU, Soviet military intelligence.”

West said Millian’s disappearance “is a huge tell, a sign,” in intelligence that something is wrong.

This reporter then asked, “so let me ask you this could both be true. Could it be true that Christopher Steele made up information in order to collect money maybe he was desperate to be paid? Who knows. I don’t know what his financial situation was and that he also obtained disinformation so he conflated the disinformation with false information jumbled it all together in this dossier?”

“And as you went through (the dossier) line by line that those sources that didn’t seem to exist were convoluted with sources that possibly did exist…” I asked.

“I think that it is quite likely…and there really was some kind of a source,” West said. “But I think that Chris invented, embroidered and exaggerated beyond that…”

As for the role of the FBI in the dossier, West discussed it at length with this reporter, saying the failure of the FBI to do its due diligence to ensure that the dossier was validated is “criminal.”