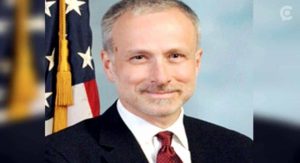 Former FBI General Counsel James Baker met with the Democratic party’s top lawyer, Michael Sussmann, to discuss the ongoing investigation by the bureau into the Trump campaign’s alleged ties with Russia. This meeting happened prior to the FBI’s initial warrant to spy on short-term campaign volunteer Carter Page, sources close to the investigation have told SaraACarter.com. Moreover, information provided by Baker, who gave extensive testimony Wednesday to lawmakers behind closed doors, coincides with the House Intelligence Committee’s final Russia report that suggests Sussmann was also leaking unverified information on the Trump campaign to journalists around the same time he met with Baker, according to the report and sources close the investigation.

These sources say this new information from Baker exposes the bureau’s failure to inform the secretive Foreign Intelligence Surveillance Court (FISC) that the evidence used to spy on Page was partisan and unverified. It further reveals the extensive role and close connection Sussmann, a cybersecurity and national security lawyer with Perkins Coie, had with the now-embattled research firm, Fusion GPS. The Democratic National Committee and Hillary Clinton Campaign retained Fusion GPS through Perkins Coie during the 2016 election to investigate alleged ties between the Trump campaign and Russia. Fusion GPS then hired former British spy, Christopher Steele, who compiled the unverified dossier during the summer and fall of 2016. In 2017, this reporter first published that Baker was purportedly under a Department of Justice criminal investigation for allegedly leaking classified national security information to the media.  At the time, the bureau would not comment on Baker and would not confirm or deny any investigation. Baker, who resigned from the bureau in May, was the FBI’s top counsel and a close advisor to former Director James Comey.

In 2016, the Clinton campaign and the DNC paid $9.1 million to the law firm, according to reports. Sussmann, however, is also connected to CrowdStrike.  CrowdStrike is the private cybersecurity that was retained by Perkins Coie for the DNC to investigate the breach of its server after it was discovered that it had been hacked in April 2016. Although the FBI has conducted its own investigation into the breach of the server the Democratic National Committee never gave the FBI permission to access the server itself.

“These parallels between the law firm and CrowdStrike also need to be investigated,” said a former FBI official familiar with the security firm. “All of these connections aren’t coincidences and it smells to high heaven.”

According to lawmakers, he explained in detail how the Russia probe was handled by bureau officials in an “abnormal way” and detailed his meeting with Sussmann. Fox News first reported Baker’s testimony quoting Rep. Mark Meadows (R-NC) who said, “some of the things that were shared were explosive in nature.”  Meadows, who attended the deposition of Baker, told SaraACarter.com he would not elaborate on the specifics of the interview, but said, “Mr. Baker’s testimony provided a number of new facts that needed further exploration.”  Meadows expects more information in the future and follow-up interviews.

Baker was forthcoming about what he knew and what took place during the investigation, multiple sources said. The information regarding the meeting between Baker and Sussmann would indicate that the FBI was more than likely aware that the law firm was hired by the DNC to investigate alleged connections between the Trump campaign and Russia, but withheld that information from the secret FISC when it sought the warrant to spy on short-term campaign volunteer Page in October.

“There’s no way the FBI could have not known it was Perkins Coie being paid by the DNC and Clinton campaign but failed to disclose the information to the FISA courts,” said a source familiar with the investigation told SaraACarter.com, who noted Baker met with Sussmann before the FBI sought the October warrant.

The meeting Baker described to lawmakers was also referenced in the House Intelligence Committee’s final Russia Report. On page 56, footnote 43, it states that in “September  2016 (redacted) shared similar information in a one-on-one meeting with FBI General Counsel James Baker.” The redacted name is “Sussmann,” according to several sources familiar with the investigation.

The footnote states, “Around the same time as his meeting with FBI, (redacted) shared the information with journalists, including (redacted) of Slate, who published an article at the end of October … Was a Trump Service Communicating with Russia?,” Slate, Oct. 31, 2016.” Sussmann allegedly shared the some of the same information he gave to Baker with Franklin Foer, a journalist with Slate at the same time the bureau gathered the information for their own investigation into Trump’s campaign.

Sussmann did not immediately return calls seeking comment. FBI spokeswoman Carol Cratty told SaraACarter.com that the FBI is not commenting as the investigations are ongoing.

The Hill’s John Solomon reported late Wednesday that a source familiar with the current evidence gathered by Congress said it’s a “bombshell that unequivocally shows the real collusion was between the FBI and Donald Trump’s opposition — the DNC, Hillary, and a Trump-hating British intel officer — to hijack the election, rather than some conspiracy between Putin and Trump.”

Another source close to the investigation said that Baker informed the committee that Sussmann hand-delivered information to Baker in both electronic format and hard copies connected to the Russia investigation and Steele’s work for Fusion GPS at the time of the meeting. The source did not disclose the exact details of the information that Sussmann delivered to Baker. Baker told the committee that he delivered the documents and electronic file to head of the FBI’s Counterintelligence Division William “Bill” Priestap, who was then the boss of former FBI Special Agent Peter Strzok, who has since been fired by the FBI for his actions during the Russia investigation and the discovery of tens of thousands of text messages with his paramour FBI attorney Lisa Page. Page resigned, like Baker, in May from the bureau.

[dropcap]B[/dropcap]aker’s meeting with Sussmann appears to fit the unusual pattern established by FBI officials that handled the Russia probe and lend credence to lawmakers claims that the investigation into Trump was a partisan move by Democrats to target him, sources said. For example, three-time demoted DOJ official Bruce Ohr, who also gave a deposition last month to Congress, was being used as a back channel by the bureau to communicate with Steele even after the FBI terminated him as a confidential source for giving information to the media. A slew of Ohr’s handwritten notes, emails and texts show that both he and Steele remained in constant contact at the same time Ohr was being used as a source to pass information from Steele to the bureau. FBI Agents kept copious notes in all 12 interviews they had with Steele, known in the bureau as 302 reports. Those 302s, along with the Foreign Intelligence Surveillance Act (FISA) warrant on short-term Trump campaign volunteer Carter Page and the ‘Gang of Eight’ notebook on the investigation, are at the center of a battle between Congress and the DOJ for declassification.

For months, Congress has requested that Trump declassify the documents after battling Deputy Attorney General Rod Rosenstein and FBI Director Christopher Wray to no avail. Congressional members, some whom have clearance to see the documents, say “no sources or methods” would be exposed if they were declassified, but that they believe it would expose extensive evidence of abuse by the bureau on the secretive Foreign Intelligence Surveillance Court.

Several weeks ago, Trump ordered that DOJ Inspector General Michael Horowitz review the documents before he makes a determination on whether or not he’ll declassify.