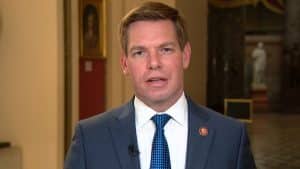 Democratic Rep. Eric Swalwell has responded to claims that he was one of several politicians who was involved with an alleged Chinese spy, and blames President Donald Trump for leaking the information.

On Monday, Axios revealed a yearlong investigation into allegations that a Chinese national, Christine Fang, developed close relationships with U.S. politicians as a way to gain access to and influence U.S. political circles.

Fang reportedly helped fundraise for Swalwell’s re-election campaign, put at least one intern into his office and was seen with him at several political events.

While Fang supposedly interacted with other current members of the House, including Rep. Tulsi Gabbard and Rep. Ro Khanna, as well as two midwest mayors, Swalwell believes the information was leaked to target him.

“I’ve been a critic of the president. I’ve spoken out against him. I was on both committees that worked to impeach him,” Swalwell told Politico Tuesday. “The timing feels like that should be looked at.”

Swalwell said he first became aware that Axios was investigating his ties to Fang in July 2019, just as his his brief and unsuccessful bid for the Democratic presidential nomination was ending.

“What it appears though that this person — as the story reports — was unsuccessful in whatever they were trying to do. But if intelligence officials are trying to weaponize someone’s cooperation, they are essentially seeking to do what this person was not able to do, which is to try and discredit someone,” Swalwell said.

According to Politico, Swalwell “refused to discuss his relationship with Fang.”

He did, however, remain confident that he will maintain his seat on the House Intelligence Committee.

“As the story referenced, this goes back to the beginning of the last decade, and it’s something that congressional leadership knew about it,” Swalwell told Politico.

Donald Trump Jr. criticized Swalwell on Twitter, asking how this “compromised individual/moron” continues to sit on an intelligence committee.