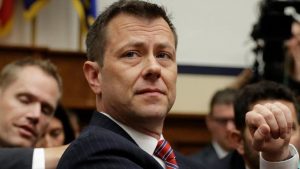 Former FBI Special Agent Peter Strzok said he would have never been compromised by foreign adversaries or other nefarious actors, despite his long time affair with his paramour former FBI lawyer Lisa Page, according to testimony released Thursday.

As head of the FBI’s Russia division in counterintelligence, Strzok was fired last year by the FBI, after a lengthy investigation by the Department of Justice Inspector General Michael Horowitz revealed details about Strzok’s affair and exposed tens of thousands of anti-Trump text messages between the lovers.

In June, 2018 there were a handful of stories that revealed then-FBI Special Agent Strzok was escorted out of FBI headquarters by officials.

And several weeks before the closed door hearing on June 27, 2018, Strzok’s security clearance was suspended.

“Within the last two weeks, there was media reporting that you had been escorted out of the FBI building and that your security clearance was suspended. Is this correct,” asks a committee investigator.

“Yes,” said Strzok, who added the clearance was reinstated so he could review and prepare for his testimony to lawmakers.

When asked by the committee investigator as to why management needed to escort Strzok from the building he said “answering it would call for speculation.”

“And the second thing is my understanding of the FBI’s personal disciplinary process is one which I’m bound by confidentiality, and I can’t talk about what I do know.”

In one of the most explosive parts of Strzok’s testimony, he revealed that the Department of Justice struck a deal with the FBI not to investigate the Clinton Foundation emails.

Then-majority general counsel Zachary Somers asked Strzok if the “the Clinton Foundation was on the server.”

Strzok said he believed that it was “on one of the servers, if not the others.” However, he noted that there was an agreement between the DOJ and Hillary Clinton that the FBI was  not allowed to search Clinton Foundation emails for that information.

Several sources have told SaraACarter.com that there is an ongoing FBI investigation into the Clinton Foundation. One of the FBI field offices believed to be part of the ongoing investigation is in Little Rock, Arkansas, the former home of President Bill Clinton and his wife.

“Were you given access to those emails as part of the investigation,” Somer’s asks Strzok.

“We were not. We did not have access,” Strzok said.

He said the FBI eventually was granted access to the Clinton’s server, but only after  negotiating with Clinton’s attorneys.

He said the attorney’s kept them from searching on the foundation and there was “a significant filter team that was put in place to work through the various terms of the various consent agreements.”

A storm of controversy surrounded Strzok and Page after their text messages were discovered by the Special Counsel’s office in the summer of 2017.

Strzok, who began his career with the FBI in 1996, has always stated that his personal feelings about Trump did not interfere with his role as an agent.

However, his text messages went far beyond feelings about Trump, revealing an “insurance policy” if Trump were to be elected president and suggesting he was somehow going to stop Trump from being elected.

Under questioning by House Judiciary Committee Rep. John Ratcliffe, R-GA., Strzok reveals that Mueller never questioned him on bias during the time the text messages were discovered by the Special Counsel. Strzok, however, was removed from his role in the Special Counsel’s office by Mueller but the Special Counsel did not reveal this information until Congressional members pressured the counsel on the findings.

Ratcliffe asks if anyone at the Special Counsel questioned Strzok in reference to a text message from Strzok to Page regarding his explicit statement that he can “protect the country on many levels.”

“Did they make any inquiry as to whether or not when you said I can protect the country on many levels, that reflected bias or prejudice against Donald Trump,” Ratcliffe continued.

In all, Strzok told Ratcliffe that Mueller never questioned him on any of the anti-Trump texts he and Page, who also was on the Special Counsel for some time, sent to one another.

The Affair With Page

During the closed door testimony, Strzok was asked by a Republican investigator with the committee if his affair made him “vulnerable to potential recruitment” by “hostile intelligence service[s].”

“I don’t think I would characterize it that way,” Strzok said. “I think it is not so much any particular action as it is the way that action might be used to coerce or otherwise get somebody to do something.”

Strzok said his extramarital affair did not make him vulnerable, nor did it “have any power in coercing me to do anything other than obeying the law and doing honest, competent investigation.”

However, it is common knowledge in the intelligence community and FBI that an extramarital affair is “a sure way to make you a target through blackmail and makes one susceptible to recruitment by foreign intelligence agencies,” said a former intelligence official, who spent nearly 30 years oversees.

“It’s an important question and one that should have been asked and investigated,” said the intelligence official. “Affairs are the number one way to get compromised.”

Strzok was defiant during the questioning regarding Page, saying he would absolutely not give in to blackmail by anyone who would attempt to do so. He said he had not been blackmailed or coerced by anyone but if he had he “would immediately go report that to my superiors and see how they wanted to follow up…But it is—I absolutely would not have been vulnerable or even let alone consider any sort of recruitment attempt.”

He also said his affair was not against bureau policy.

“I don’t know what they did or didn’t,” said Strzok.”I would tell you—and I think why it’s relevant that—why I’m saying this isn’t necessarily relevant is that my understanding of Bureau regulation is that, whatever morally you may think of an extramarital affair, it is not prohibited by Bureau regulation or policy.”

“Certainly if somebody is in your chain of command, if there’s any sort of impropriety or favoritism, or things like that, it is. But simply an extramarital relationship is not,” Strzok added.

Investigators with the committee and lawmakers also questioned Strzok on the FBI’s decision to open the investigation into Clinton’s use of a private server to send classified emails at headquarters instead of the Washington Field Office.

“So why would this matter or this case have been opened up by FBI headquarters as the office of origin, for lack of a better term, and not opened up at the Washington field office,” the investigator asked Strzok.

The issue is important because GOP lawmakers have been trying to ascertain why the Clinton investigation was moved to the headquarters and run by a select group of people. For example, lawmakers on the House Judiciary Committee attended a closed door briefing with FBI Deputy Director Andrew McCabe on Dec. 21, 2017. In the briefing bureau officials confirmed that the investigation was overseen by a small group in Washington headquarters rather the normal process of conducting the investigation at the field offices. For example, the Clinton email server in question was based in New York.

Clinton’s case was known as “a special” which is the FBI’s way of describing when a case is controlled by hierarchy.

Strzok is asked by investigators “we’ve entertained some questions and tried to figure out what the term means that has been associated with this particular investigation, a “special” a “headquarters special.” What is that designation as assigned to an investigation that the FBI is doing?”

Strzok says he thinks the term “special” is a statement that was used in previous, earlier bureau times.”

In describing the special, he said “that it was something where a task force would be created, my recollection is, that there was frequently with a special a particular costing and administrative process would be set up so that resources could be tracked and funded as part of supporting that special.”

Strzok said he didn’t know exactly who made the decision to move the Clinton investigation to Washington D.C. headquarters.

“I don’t know, because I was not present when it occurred,” said Strzok. “My understanding is that decision was made by senior executives at the FBI, certainly at and likely above (then) Assistant Director (Randy) Coleman’s level.”

Strzok’s then asked how common is it for an investigation to be moved to FBI headquarters.

“In the normal course of business, would a case have been opened up at the Washington Field Office as the office of origin,” the investigator asks.

Strzok admits that the “ordinary course of business is that cases are opened up out of field offices and run and supervised there.”

But says he’s “aware of circumstances where cases are opened and have been opened and run out of FBI headquarters.”

“It’s not the typical case, but this was not the first, in my experience,” he says.

As for Clinton’s classified emails, Strzok is asked if the “spillage of potentially classified information, this is where that particular investigation or any potential criminal violations that went with that, that those matters would be investigated?”