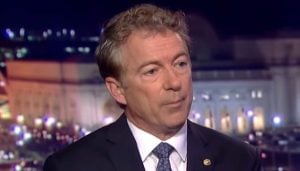 Fox News reported Wednesday that Sen. Rand Paul plans to refer Democratic candidate Joe Biden’s son, Hunter Biden, to the Department of Justice for a “criminal referral.” The call for a referral came on the heels of a Senate report, which revealed that more than $3.5 million had been transferred into his bank account from the wife of a former Moscow Mayor, among other suspicious financial transactions.

The lengthy report showed that Hunter Biden took $3.5 million in a wire transfer from Elena Baturina. Baturina is the richest woman in Russia and the widow of Yury Luzhkov, the former mayor of Moscow, with links to Vladimir Putin. The wire transfer took place in 2014, during the time Vice President Biden was serving in the Obama administration. “Baturina became Russia’s only female billionaire when her plastics company, Inteko, received a series of Moscow municipal contracts while her husband was mayor,” the report noted.

Paul told Fox News that the transaction is highly suspicious and should be investigated by the Department of Justice.

“I think riding on Air Force Two and doing business is illegal. I think that is against the law, and probably a felony. I think it’s illegal to take money from a Russian politician’s wife, $3.5 million,” Paul told Fox News. “Was it reported accurately? I think the only way to determine the actual legality of this is to have it referred to the Department of Justice. So, I’m going to send the report over. I don’t know if the whole committee will vote for it, but I’m sending the report, tomorrow, to the Department of Justice, and we’re asking for a criminal referral.”

Another key finding in the report alleges that “Hunter Biden had business associations with Ye Jianming, Gongwen Dong, and other Chinese nationals linked to the Communist government and the People’s Liberation Army. Those associations resulted in millions of dollars in cash flow.”

As alarming, another finding in the report shows that “Hunter Biden paid nonresident women who were nationals of Russia or other Eastern European countries and who appear to be linked to an ‘Eastern European prostitution or human trafficking ring.’”

Hunter Biden’s work with Burisma Holdings was highly criticized behind closed doors when his father was Vice President. Former Vice President Joe Biden had been put in charge of overseeing foreign issues with Ukraine when his son became a paid board member for Burisma, in which he received a salary of roughly $50,000 per month.