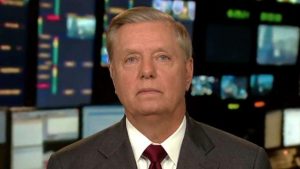 Senator Lindsey Graham‘s office pushed back on allegations made by Fox News host Tucker Carlson that he coordinated and pushed for President Donald Trump to sit down with The Washington Post’s Bob Woodward. Instead, his office noted that the President’s White House aides were charged with the approval process and in the end it the final decision rested with Trump.

Graham’s office reiterated that the Senator is a staunch defender of President Trump, saying Trump fully cooperated “with Woodard for this book,” while Chiefs of Staff Mick Mulvaney and Mark Meadows allowed the interviews.

A few excerpts were released this week of Woodward’s forthcoming book and they allege that the President downplayed the coronavirus pandemic when he knew it had a higher mortality rate than other common viruses such as the flu.

Trump says he didn’t want to instill fear in the American people and took early action that prevented many deaths.

Graham’s office pointed to Politico, which reported “In 2018, White House aides shielded Trump from an interview for his book ‘Fear’ because they didn’t want to give the author more ammunition than he already had. The book was withering — portraying the Trump administration suffering a ‘nervous breakdown’ with anecdotes from current and former aides inside and outside the administration.”

The piece adds that upon the release of excerpts of Woodward’s new book, “White House aides quickly started blame one another. Newer White House staffers tried to pin the decision to help Woodward on previous offices or particular aides, even though the president himself made the call to work with the author.”

It adds, “The interviews took place over a few iterations of the White House staff, including during the tenures of acting chief of staff Mick Mulvaney and current chief of staff Mark Meadows, with Woodward reporting through most of the summer. His first meeting with Trump occurred in early February at the White House.”

Meadows, who began his tenure at the White House in April, defends he wouldn’t have approved Woodward’s interviews if he had been there from the start. “I’m not surprised that the President was on the phone with Bob Woodward,” Meadows told Fox News host Martha MacCallum Wednesday. “Honestly, his access to the White House is probably something that I would not have recommended had I been in the Chief of Staff role very early on.”

The Senator’s office also pointed to an August Fox News op-ed in which Graham emphatically presented his endorsement of President Trump for the 2020 election. “While I’ve had my differences with the president in terms of policy and style, I will be enthusiastically voting for Donald Trump in 2020 – not just against Joe Biden,” Graham wrote in the piece.

He added, “President Trump has been a disruptive force for good, changing the status quo in a way that will benefit working Americans in every corner of American society. ”

Graham then applauded a number of Trump’s accomplishments, including his support of the military, his push for deregulation and tax cuts, a crackdown on the Chinese Communist Party, and his early response to the novel coronavirus, among a number of other policies.

“I will be voting for Donald Trump in 2020. He has earned my vote, and I think he’s earned yours too,” Graham concluded.

Graham has yet to deny an alleged role in the Woodward debacle.