EXCLUSIVE: Antisemitic Caricatures Appear On Shirts At 2020 March On Washington

Rosenstein/McCabe Square Off, Accuse One Another Of Lying In Russia Hoax 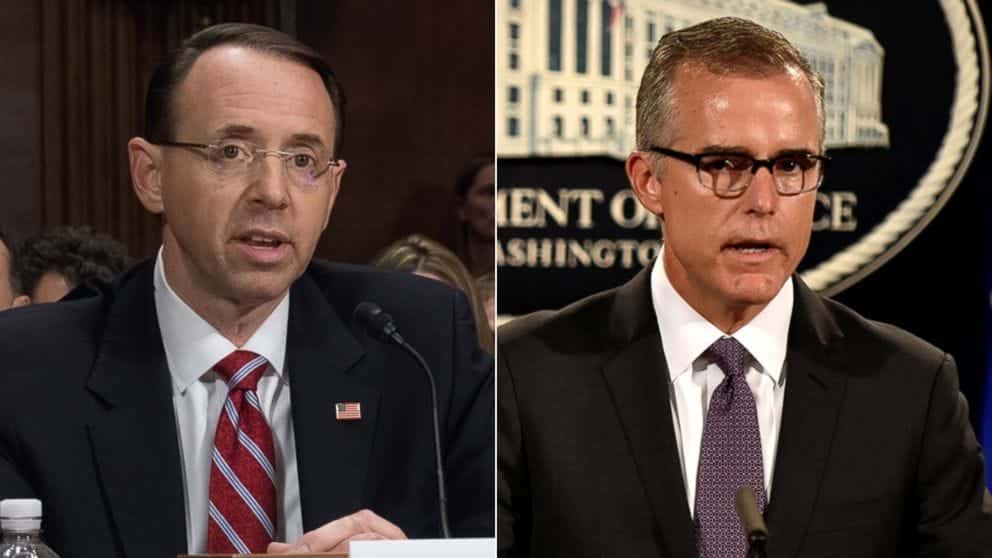 Former FBI Deputy Director Andrew McCabe squared off with former Deputy Attorney General Rod Rosenstein on Wednesday, during Rosenstein’s anticipated testimony before the Senate Judiciary Committee blaming one another for lying about what they were aware of during the bureau’s debunked investigation into the Trump campaign and Russia.

During Rosenstein’s testimony, McCabe issued a statement saying the former DAG was giving “false” testimony about his recollection regarding former FBI Director James Comey’s memos about his interactions with President Donald Trump.

Interestingly, both men accuse each other of lying, pointing the finger at one another, in one of the biggest hoaxes in modern political history. They lied to each other, all the while creating a hoax to fool the American people and the world. McCabe and Rosenstein, along with their colleagues in the bureau, DOJ and the intelligence community know that eventually they will get caught up in the lies and explanations. This is when the finger-pointing will start.

Now the investigators are being investigated. Former FBI Director Comey, FBI Special Agent Peter Strzok, FBI Special Agent Joe Pientka, FBI Special Agent Kevin Clinesmith, as well as a slew of other FBI agents, lawyers and intelligence officials are going to have to find a way to explain their malfeasance as Connecticut prosecutor John Durham continues to put the pieces together and connect the dots.

During the hearing, Rosenstein said during his testimony that McCabe did not share details about Comey’s memos or his conversations with Trump prior to opening the special counsel investigation. Rosenstein claimed that he didn’t know about the memos until they were leaked by Comey’s friend Columbia Law School Professor Daniel Richman to the media. Comey admitted to Congress during testimony in June 2017 that he purposefully leaked several memos to Richman in an effort to ensure a special counsel investigation.

“Lying is when you ask someone a direct question and get a false answer. Candor is when you’re forthcoming with information someone needs to know,” said Rosenstein. “I believe McCabe should have recognized that when I became acting AG (overseeing the Russia probe), I needed to know about Comey’s memos and he didn’t tell me until a couple of hours before they showed up in the New York Times.”

It didn’t take long for McCabe to fire back at Rosenstein, saying “Mr. Rosenstein’s claims to have been misled by me, or anyone from the FBI, regarding our concerns about President Trump and the Trump campaign’s interactions with Russia are completely false.”

“Mr. Rosenstein’s testimony is completely at odds with the factual record. It looks to be yet another sad attempt by the President and his men to rewrite the history of their actions in 2017. They have found in Mr. Rosenstein – then and now – a willing accessory in that effort,” he said.

In the end, however, it won’t just be one man’s word against another. It will be interesting to see what Durham’s investigation uncovers and in the end how the web of lies that led to the Russia hoax will unravel.