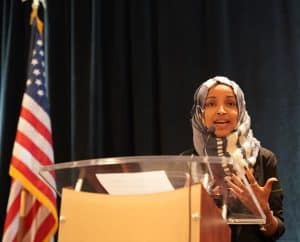 Minnesota Democrat Rep. Ilhan Omar is facing backlash from top Republican and Democratic leadership for blasting the largest pro-Israel lobby, AIPAC, on twitter Sunday. Omar responded to a tweet by the Intercept’s Glenn Greenwald about the US Israel relationship saying, “It’s all about the Benjamins baby”

Later, Omar responded to a tweet from Forward journalist Batya Ungar-Sargon that read “Would love to know who @IlhanMN thinks is paying American politicians to be pro-Israel, though I think I can guess. Bad form, Congresswoman. That’s the second anti-Semitic trope you’ve tweeted.”

GOP Leader Kevin McCarthy threatens punishment for @IlhanMN and @RashidaTlaib over their criticisms of Israel. It's stunning how much time US political leaders spend defending a foreign nation even if it means attacking free speech rights of Americans https://t.co/It1fGm1b70

AIPAC quickly responded to Omar’s slanderous tweet saying, “We are proud that we are engaged in the democratic process to strengthen the US-Israel relationship. Our bipartisan efforts are reflective of American values and interests. We will not be deterred in any way by ill-informed and illegitimate attacks on this important work.”

We are proud that we are engaged in the democratic process to strengthen the US-Israel relationship. Our bipartisan efforts are reflective of American values and interests. We will not be deterred in any way by ill-informed and illegitimate attacks on this important work.

Under President Trump the U.S. has developed a stronger relationship with Israel. This week US troops are in Israel working alongside the Israel Defense Forces for defense collaboration. The U.S. Defense Department also recently purchased Israel’s Iron Dome Missile interception technology.

Omar’s Sunday tweet was not her first anti-semitic display. Last month Omar compared Israel’s policies to the Jim Crow Era. Omar said she did not believe Israel is a democracy because it is a Jewish state.

Many of them truly know this, but don’t want to accept it. In the same way many Americans knew separate yet equal was immoral but remained silent until brave few were silent no more.

They can attack, spin my words and vilify me, but they will not succeed in silencing me! https://t.co/JSwhoSQuGF

US Ambassador to Israel David Friedman referred to Omar’s tweet as ‘painful but amusing.’

Congresswoman from Minnesota falsely claims US officials are paid to support Israel. I find that painful but amusing. This US official gladly took a massive pay cut for the privilege to serve & the honor of advancing US' best interests by supporting the US-Israel relationship.

Omar doesn’t seem to miss an opportunity to criticize the Jewish people and Israel. In Nov. 2012, Omar tweeted about the alleged ‘evil doings of Israel’ saying “Israel has hypnotized the world.”

Moreover, Omar is now facing backlash from both sides of the political aisle. For example, former U.S. Ambassador to the UN Nikki Haley tweeted, “This CANNOT be tolerated in our own Congress by anyone of either party.”

To see this at the UN was a fight every day. This CANNOT be tolerated in our own Congress by anyone of either party. In a time of increased anti semitism, we all must be held to account. No excuses. ❤️🇺🇸 #NoSpaceForHate#NoToleranceForAntiSemitism #WhatIsHappeningWithPeople https://t.co/zUaNjp3hHo

Co-signed as an American. We should expect all elected officials, regardless of party, and all public figures to not traffic in anti-Semitism.

Thank you, Chelsea – antisemitism on all sides, in all spaces, no matter how uncomfortable should always be called out and condemned. https://t.co/H1R6l6rXnY