Protests, Riots Continue Across The Nation, As Federal Gov Warns It May Intervene 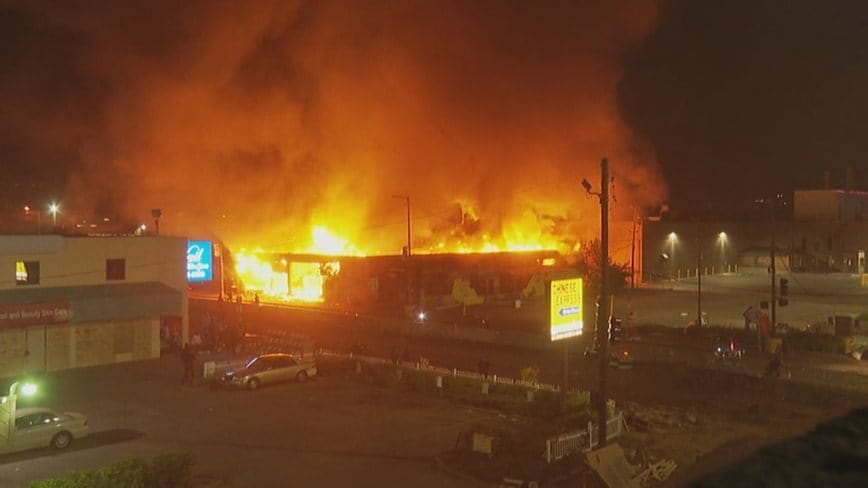 Saturday was another day full of protests and riots in the wake of the killing of George Floyd, a 46-year-old black man, Monday by a white Minneapolis police officer, who kneeled on Floyd’s neck. The situation has escalated across the nation and the federal government is addressing options to intervene should the crisis grow.

Derek Chauvin, the officer who kneeled on Floyd’s neck, and three other police officers — Tomas Lane, Tou Thao and J. Alexander Kueng — were fired Tuesday. Chauvin was arrested Friday and charged with murder in the third degree. Following his arrest, Chauvin’s wife announced her intention to file for divorce.

Thousands of people across the country took to the streets this weekend, including in cities like Minneapolis, New York, Los Angeles and Washington, D.C.

Demonstrations also continued in Columbus, Ohio, where the state capitol building was broken into late Thursday night. After police officers were attacked, tear gas was fired into the crowd. Columbus has instituted a curfew as a result of the violence.

According to WJLA, the Pentagon has already reportedly put U.S. military police units on order to be ready to step in should the violence escalate. It is part “of the Insurrection Act of 1807 and hasn’t been used since 1992 during the rioting that followed the acquittal of four officers involved in the beating of Rodney King.”

In Florida’s capital city of Tallahassee on Saturday, videos posted to social media showed a driver running his red truck into a crowd of protesters. It was not immediately clear if anyone was injured.

So scary— truck drives right through a #BlackLivesMatter protest in Tallahassee. Police have the driver in custody, injuries are being confirmed by reporters on the ground. pic.twitter.com/nKMf4fAJ7e

“Thankfully no one was seriously injured,” Tallahassee Mayor John Dailey wrote on Facebook. “The driver of the vehicle was immediately taken into custody. The peaceful protestors have my unwavering support and I unequivocally condemn any violence toward protestors.”

Portland: Antifa & BLM smash buildings, they go in to loot, then they set it on fire. #antifa #BlackLivesMatter pic.twitter.com/nj0ah9VO1z

In New York City, the New York Police Department (NYPD) is reporting more than 200 protest-related arrests following Friday night’s demonstrations, some of which turned violent, in Brooklyn and Manhattan over Floyd’s death. Police arrested a 27-year-old woman from the Catskills for allegedly trying to set fire to a police vehicle with four officers inside in Crown Heights by throwing a Molotov cocktail.

The protests even reached Appalachia, raging on in Pittsburgh, Pennsylvania, where KDKA reporter Ian Smith was trampled by rioters. Smith said that protestors “stomped and kicked” him and that his camera was destroyed. He says another group of protestors saved his life.

I’m was attacked by protestors downtown by the arena. They stomped and kicked me. I’m bruised and bloody but alive. My camera was destroyed. Another group of protesters pulled me out and saved my life. Thank you! @KDKA pic.twitter.com/clyANKodth

As was the case in many other cities this weekend, a police car was set on fire in Pittsburgh.

CNN’s headquarters in Atlanta, Georgia was attacked by a mob on Friday. Rioters even broke into the lobby of the building.

The front of CNN Center in Atlanta was the scene of violent protests on Friday evening that resulted in damage to the front of the building and inside https://t.co/Uz5PsPdoND pic.twitter.com/TsIsu9LCbn

Friday night wasn’t just a bad night for CNN. Fox News anchor/reporter Leland Vittert and his camera crew were assaulted by demonstrators while covering the events in Washington, D.C. He was chased away by agitators while in taking part in a live shot.

Fox News’ @LelandVittert and his camera crew are not only assaulted by protesters, but one of them actually steals his microphone and throws it at him.

I’m not seeing any mainstream reporters or media outlets reporting on this at all. I wonder why. pic.twitter.com/YyK6XRITZ4

“We support the right of peaceful protestors, and we hear their pleas,” said Pres. Trump. “But what we are now seeing on the streets of our cities has nothing to do with justice or peace.”

“We support the right of peaceful protestors, and we hear their pleas. But what we are now seeing on the streets of our cities has nothing to do with justice or peace.” pic.twitter.com/ckZ28xXSkA

The President added that his administration “will always stand against violence, mayhem, and disorder. We will stand with the family of George Floyd, with the peaceful protestors, and with every law-abiding citizen who wants decency, civility, safety, and security.”

Black leaders across America have taken to social media to condemn ANTIFA, the group at the center of the riots.

“I refuse to allow a bunch of ANTIFA affiliated thugs to come to by beloved city of Atlanta and burn it to the ground, under the guise of #BlackLivesMatter,” said. Georgia state Rep. Vernon Jones, a Democrat. “They don’t give a damn about black lives. They only care about DESTRUCTION.”

I refuse to allow a bunch of ANTIFA affiliated thugs to come to my beloved city of Atlanta and burn it to the ground, under the guise of #BlackLivesMatter.

They don’t give a damn about black lives. They only care about DESTRUCTION.