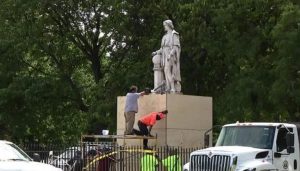 Philadelphia Mayor Jim Kenney is requesting the removal of his City’s Christopher Columbus statue as a “part of reckoning with the legacy of systemic racism,” he announced Wednesday.

The decision comes as protests continue nationwide and as rioters call for the downing of historic monuments and statues.

Kenney added that the recommendation will be given to the Philadelphia Art Commission on July 22 for final approval, Kenney wrote on Twitter.

Part of reckoning with the legacy of systemic racism means reconsidering what figures deserve to be commemorated in our public spaces.

On July 22, the City will ask the Philadelphia Art Commission to approve the removal of the Christopher Columbus statue. https://t.co/pmX1CHrvqH

“In recent weeks, clashes between those individuals who support the statue of Christopher Columbus in Marconi Plaza and those who are distressed by its existence have deteriorated to a concerning public safety situation,” Kenny said in a statement Wednesday. “It is a situation that cannot be allowed to continue.”

He added, “The City is committed to finding a way forward that allows Philadelphians to celebrate their heritage and culture, while respecting the histories and circumstances of others that come from different backgrounds.”