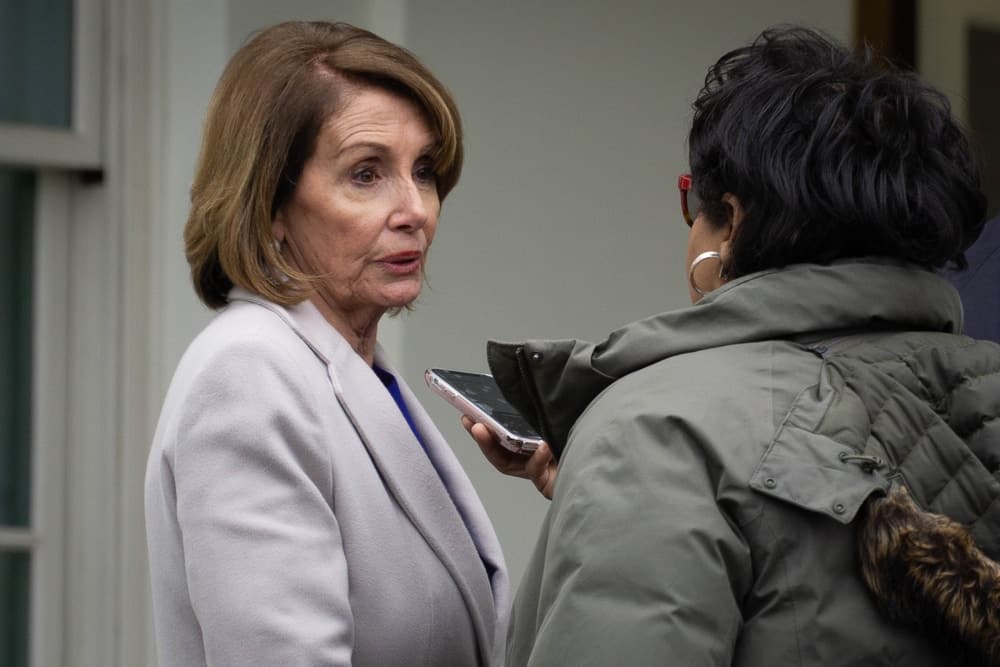 House Majority Speaker Nancy Pelosi, Jan. 4, 2019.
House Democrats will not negotiate a resolution to the border wall, said House Speaker Nancy Pelosi Thursday, as she dismissed any rumors that Democrats are working to offer a resolution to President Trump, as a solution for ending the partial government shutdown.
“That’s not true. That’s not true. That’s not true,” Pelosi told reporters at a press briefing.
She said the Democrats position has not changed and that Trump must reopen government before parties discuss any compromise or resolution.

Pelosi’s unmovable position on the issue, also forced Trump to postpone the State of the Union Address until the government reopens. On Wednesday Pelosi denied him the use of the House Chamber for the SOTU address.

Pelosi had originally said she was concerned that DHS and Secret Service would not have the funding to properly secure the event, an accusation that was denied by the Secret Service and Department of Homeland Security.

“Sadly, given the security concerns and unless government re-opens this week, I suggest that we work together to determine another suitable date after government has re-opened for this address…” wrote Pelosi. Pelosi suggested delivering the address on January 29.

Today, I wrote to @realDonaldTrump recommending that we delay the State of the Union until after government re-opens, as the @SecretService, the lead federal agency for #SOTU security, faces its 26th day without funding. https://t.co/K2oL8WGvqo pic.twitter.com/g3fIlxDbbK

Trump said that while the shutdown was ongoing, “Nancy Pelosi asked me to give the State of the Union Address. I agreed.”

He added that she “then changed her mind because of the shutdown, suggesting a later date. This is her prerogative-I will do the Address when the shutdown is over.”

As the Shutdown was going on, Nancy Pelosi asked me to give the State of the Union Address. I agreed. She then changed her mind because of the Shutdown, suggesting a later date. This is her prerogative – I will do the Address when the Shutdown is over. I am not looking for an….

….alternative venue for the SOTU Address because there is no venue that can compete with the history, tradition and importance of the House Chamber. I look forward to giving a “great” State of the Union Address in the near future!

Trump sent a letter to Pelosi, saying he looked forward to speaking in the House Chamber. Trump said he was told by both DHS and US Secret Service that securing the event would not be a problem.

Trump Struggles to Get Democrats To The Table

On Saturday, the president gave Democrats the opportunity to reopen the government. The compromise included amnesty for DACA recipients and TPS immigrants. Democrat lawmakers are refusing to cave in to this deal because it supports the construction of a wall at the US Mexico border. Pelosi asked Trump to then cancel the State of the Union saying she wouldn’t entertain a concurrent resolution to allow the the president to deliver the address in the House Chamber.

This afternoon, I sent @realDonaldTrump a letter informing him that the House will not consider a concurrent resolution authorizing the President’s State of the Union address in the House Chamber until government has opened. https://t.co/r1oad0xEAh pic.twitter.com/kGEbayx95u

President Trump’s letter to Speaker Pelosi on the State of the Union pic.twitter.com/B4QN9hDJnv

Nancy, I am still thinking about the State of the Union speech, there are so many options – including doing it as per your written offer (made during the Shutdown, security is no problem), and my written acceptance. While a contract is a contract, I’ll get back to you soon!

“No Venue That Can Compete with…House Chamber.”

Many lawmakers speculated that Trump was exploring different venues after he tweeted about options for delivering the address.

Trump also said that no other venue was suitable, “… there is no venue that can compete with the history, tradition, and importance of the house chamber.”

As of Thursday, Trump continued to push Democrats to come to the negotiation table. The government has been closed for 34 days but neither side appears close to reaching an agreement.

As of Thursday, Pelosi told members of the press that she ‘doesn’t understand why’ the president needs a wall.

As the #TrumpShutdown hits Day 34, the consequences of this senseless shutdown continue to build. President Trump & Senate Republicans must allow us to do the responsible thing and re-open government. https://t.co/sy2wYGtkVf

Nancy just said she “just doesn’t understand why?” Very simply, without a Wall it all doesn’t work. Our Country has a chance to greatly reduce Crime, Human Trafficking, Gangs and Drugs. Should have been done for decades. We will not Cave!