Biden: Trump Shouldn’t Blame China For The Virus, People Can’t Make The Distinction ‘between a South Korean and someone from Beijing’ 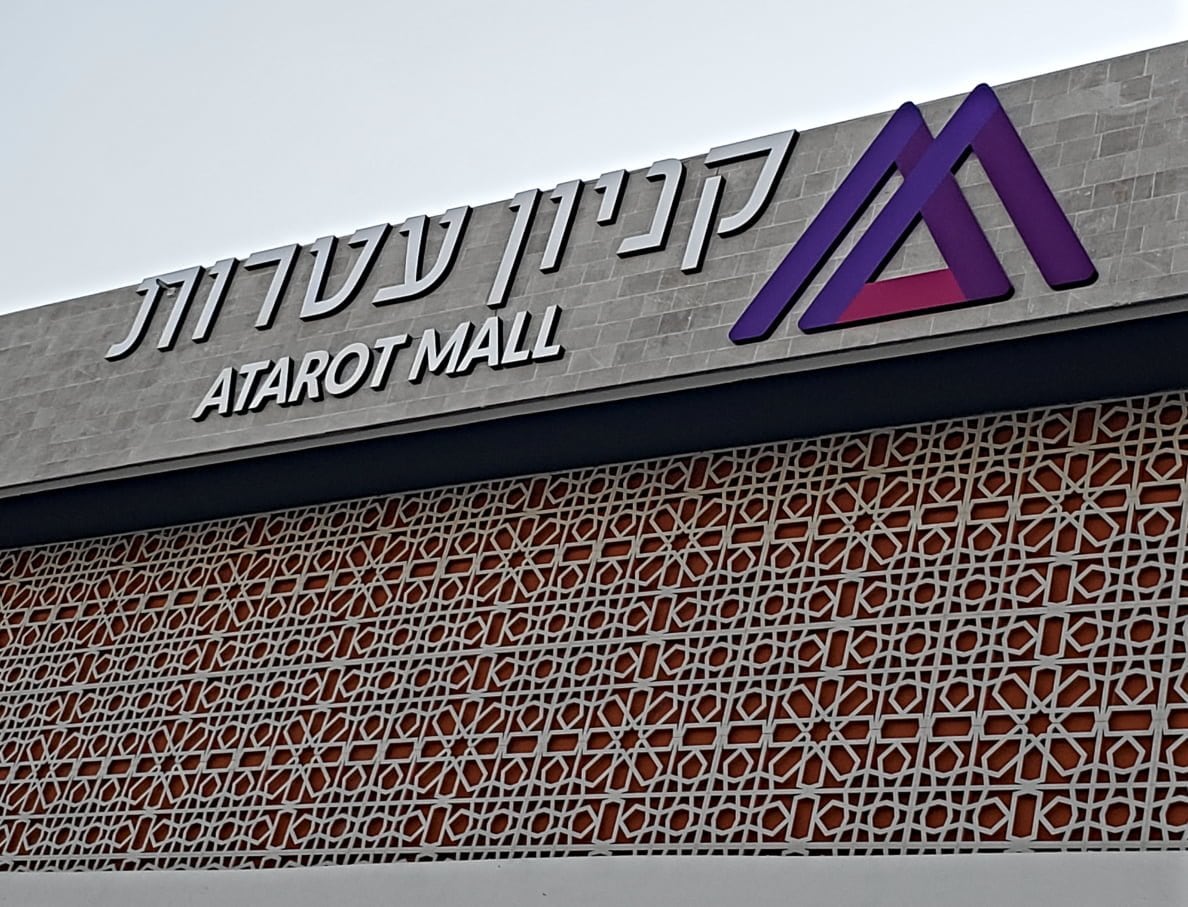 A brand new, two-story shopping mall just opened in Atorot, a poor, largely Arab section of northern Jerusalem that will serve both Palestinians and Israeli Jews. It is not being celebrated by everyone and may come with a price.

The mall has drawn the ire of Palestine Arab leadership who say ‘coexistence’ between the groups is criminal and in many ways, it reveals the internal machinations of the deep divide that has made the U.S. peace negotiations so difficult.

Secretary of State Mike Pompeo told the World Economic Forum in Davos, Switzerland last week that a U.S. peace push “won’t be [uniquely] a U.S.-driven process” and would require the cooperation of all parties, including allies in the region.

“Ultimately, the Israelis and the Palestinians will have to come to an agreement,” he said.

If anything, the Atorot Mall, is another test of that process. It is just across Israel’s separation barrier from Ramallah, the government seat of the Palestinian Authority. Atorot, known as Al-Ram in Arabic, is a little more than six miles from downtown Jerusalem.

The new mall is just meters away from the Qalandiya crossing into pre-1967 Israel. There are approximately 210,000 residents of the Jewish and Arab neighborhoods surrounding the mall. Despite the high concentration of residents, there are no other shopping malls in the area. To get to the next closest mall, shoppers have to drive approximately an hour. 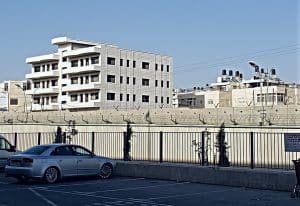 Buildings in Ramallah can be seen from the Atorot Mall parking lot, with the Separation Barrier in between.

The mall was spearheaded and financed by the Israeli supermarket chain owner/entrepreneur Rami Levy to the tune of more than $50 million. Levy owns 26 supermarkets throughout Israel and the disputed territories, all of which employ and are frequented by both Arabs and Israeli Jews.

ARAB PALESTINIANS AND ARAB ISRAELIS ARE UNDER-SERVED AND UNDEREMPLOYED

Recent employment records show that while 81 percent of Arab Israeli men are employed, Arabs employed in management or as teachers in the Palestinian Authority-controlled areas of Judea and Samaria (also referred to as the “West Bank”) earn just $570 per month, while supermarket employees in those areas earn far less.

Levy pays all his employees equally, with the average salaries for both reaching four to seven thousand NIS ($1000 – 2000) per month. All his employees also receive medical and social benefits – no non-government employees in the PA controlled areas receive such benefits.

So, with enormous new opportunities for expanded shopping, employment and investment opportunities – Levy sought investors from Arab companies – you’d think there would be excitement or at least great interest surrounding this new economic bonanza.

Plans for the mall were first announced in 2016 and were immediately met with outrage and explicit threats.

Calling a united rejection of any commercial cooperation with the “extreme Zionist right” a “collective responsibility, Arab leadership warned all Arabs that any complicity in these “normalization projects” will be met with dire consequences, including the removal of commercial licenses, plus financial penalties under PA law.

“Normalization” is the derogatory term used by Palestinian Arab leadership for any cooperation with anything or anyone Israeli.

This hardened position is why so few Arab Israelis vote in Israeli elections: it is considered a “validation” of the “Zionist entity.” But because so few vote – only 1.5 percent of Jerusalem Arabs vote in municipal elections – their communities’ interests are frequently not, or are severely, underrepresented, which in turn means they receive far fewer resources and attention from the local governments.

The anti-normalization campaign is directed at virtually any coexistence efforts. In 2014, PA leader Jibril Rajoub went so far as to slam a joint sports event between Arab and Jewish children as “a crime against humanity.”

Al-Haq, a self-styled Palestinian Arab human rights non-governmental entity based in Ramallah, informed Arab residents of northern Israel and the surrounding area not to patronize or in any other way participate in economic activity at the Atorot Mall. It warned that “businesses benefitting from Israel’s illegal settlement enterprise,” may be subject to legal action.

Over the two years time it took to build the center on the nearly three and a half acres of what had been vacant land, tensions remained high and the threats against any move towards normalization grew.

The outrage was directed in particular at Arabs who considered opening a store in the mall or even working or shopping there.

The head of the Palestinian Consumer Protection Society, Salah Haniya, admitted to pressuring five Palestinian businessmen who planned to open stores in the Atorot Mall.

Haniya threatened the shop owners that the PCPS would reveal the names of the Palestinian companies that sought partnership with Levy, put them on the Palestinian blacklist, boycott them and urge the Palestinian Chamber of Commerce to freeze their memberships.

The Palestinian Authority’s official news agency warned Arabs cooperating with the Atorot Mall. It informed Arab citizens that boycotting the venture was a “religious, national and moral duty.” The leadership stated that any kind of economic normalization “is an act of intentional treason.”

Despite the harassment by Palestinian Authority leadership, several Arab businessmen ultimately agreed to open outlets in the new mall. Levy made an especial effort to bring in stores which are popular in the Arab sector, and to encourage Israeli businesses which brought in Arabs as franchise holders.

THE MALL OPENS TO VIOLENCE

Following the years-long hostility carried through the Arab media, the opening of the Atorot Mall was marred by violence.

On Tuesday, January 8, when the doors opened to the Atorot Mall, firebombs and stones were hurled at shoppers. The weapons came from Ramallah, which is just across the highway (literally a stone’s throw away) from the mall parking lot.

Later that week a cartoon ran on official PA TV depicting a woman with a shopping cart filled with purchases, while her reflection in a mirror shows the cart is full of human skulls. The text informs Arabs that shopping at the Atorot Mall would be committing “treason,” and urges a widespread boycott. Text above the cartoon read: “Do not be a partner in the Judaization of [Jerusalem.]”

The Fatah movement, the party of Palestinian Authority leader Mahmoud Abbas, called on its people to boycott Rami Levy’s shops, stating that cooperation with the “settler enterprise” is a betrayal of the “Palestinian homeland.”

Buying “Israeli settlement goods is support for the occupation and its economy used to kill our youth and confiscate our land,” said Osama al-Qawasmi, the spokesman of the Fatah Revolutionary Council.

Levy’s headquarters are in Talpiyot, the industrial area of Jerusalem, well within the 1948 Armistice lines.

Although Levy claims a 100 percent occupation rate in the new mall and 50 stores, three weeks into its life on a mid-afternoon weekday, the mall was extremely quiet. Store owners pleasantly smiled at passersby, but most of the mall traffic was concentrated in the open eating area, near the entrance. The huge supermarket occupies 500,000 square feet and is stocked full of produce, meats, small appliances and other staples. There were at least twice as many workers on the floor as customers. 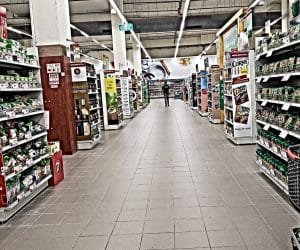 A well-stocked, but lonely aisle in the Rami Levy supermarket in the new Atorot Mall in northern Jerusalem

But maybe Levy, who is clearly in it for the long haul, knows he can wait out the current standoff. Moreover, he hopes to eventually see the same crowding and crammed aisles that his store in Gush Etzion, which is beyond the 1948 Armistice Line, has enjoyed for years.  In that location Arabs and Jews have worked and shopped together for decades. Meanwhile, in Atarot, Levy has already applied for a permit to expand the mall to a third floor.