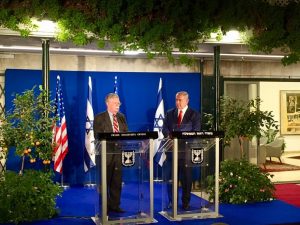 Netanyahu will join Trump for a working meeting on March 25 during which they will “discuss their countries’ shared interests and actions in the Middle East,” according to the White House press release Wednesday. The U.S. President will then host Netanyahu at a dinner on March 26. This will be Netanyahu’s third visit to the Trump White House.

What a difference nine years makes.

OBAMA HAD A DISTINCTLY DIFFERENT APPROACH TO ISRAEL AND NETANYAHU

It was on March 23, 2010, that Netanyahu came to the White House. He was met there with a very different reception by then-President Barack Obama.

When Obama came into office his views of the Middle East and the conflict between Israel and the Palestinian Arabs had been formed by relationships with those who viewed Israel as the primary stumbling block to peace in the region.

Obama famously told a group of prominent American Jews that he intended to insert “daylight” between the U.S. and Israel. The reason given for the intentional distancing was that Obama believed no forward progress had been made during the time when the U.S. and Israel were close allies. Obama decided it was time to wield the stick instead of the carrot. But he would wield the stick only on the Jewish State, not its neighbors.

And so when Netanyahu came to the White House on March 23, 2010, Obama treated him “like an unsavory Third World dictator.”

There was no official press conference, as is de rigueur when world leaders come to the White House. No photographs were permitted of even a handshake between the two leaders.

Upon Netanyahu’s appearance in the White House, Obama handed Netanyahu a list of 13 demands. When little progress was made, Obama abruptly stood up and informed Netanyahu that he was “going to have dinner with Michelle and the girls,” and left the Prime Minister to cool his heels for over an hour.

When Obama finally returned to meet with Netanyahu, relations had not improved. A request was made by Israel for the issuance of a joint statement. The White House refused.

Ed Koch, former Mayor of New York City, was appalled by Obama’s treatment of the Israeli Prime Minister. Koch said at the time that it was “unimaginable that the President would treat any of our NATO allies, large or small, in such a degrading fashion.” Even though there were clearly policy differences between the Obama administration and the Netanyahu government, according to Koch, a Democrat, that was “no excuse. Allies often disagree, but remain respectful.”

The announcement of Netanyahu’s visit to the Trump White House has come while U.S. Secretary of State Mike Pompeo is in Jerusalem, during a several days-long swing through the Middle East.

Tongues were already wagging when Pompeo’s visit to Israel was announced. Israelis head to the voting booths next month, and some were suggesting Pompeo’s visit would provide an unfair boost to Netanyahu’s standing.

The political party of the Prime Minister, Likud, has once again been climbing in the polls, after several hard blows including indictments threatened against Netanyahu, and the formation of a new purportedly-centrist political party.

Netanyahu’s surprise visit to the White House this close to the election will likely be seen as yet another finger on the scale to assist the Prime Minister. But what a far cry from the relations between the Israeli Prime Minister – and Israel – and the last U.S. administration.