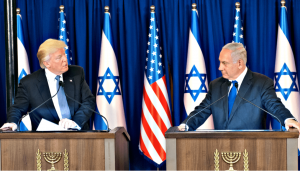 Netanyahu said the Israeli people appreciate President Trump’s recognition of Israeli sovereignty over the Golan Heights. He therefore intends to introduce a resolution into the Israeli Knesset. In that resolution he will announce the creation of a new community in that region which will be named after Trump. The resolution will be introduced into Israel’s Knesset after the eight-day long Passover holiday which ends this coming weekend.

In a press conference at the White House last month to which he invited Netanyahu, Trump signed a proclamation in which the U.S. officially recognized Israel’s sovereignty over the Golan Heights. Trump first announced his intention to recognize Israeli sovereignty over this area in a tweet on March 21.

Israel acquired control over the Golan Heights from Syria when that country invaded Israel during the June 1967 war.

According to several news outlets the new Golan Heights community will be called “Kiryat Trump,” which translates to the Town of Trump, or Trump Town.

The announcement was made in a YouTube video released on April 23 on the Israeli Government Press Office’s official site. The video was recorded during a Netanyahu family vacation to the north of Israel.