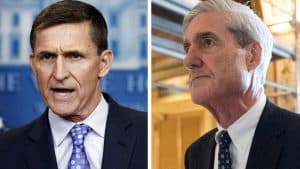 The six-page memo went on to state that ‘a sentence at the low end of the guideline range, including a sentence that does not impose a term of incarceration – is appropriate and warranted.”

According to the memo, Flynn sat for 19 interviews with the Special Counsel but the Mueller memo didn’t disclose what “substantial” information the former short-term National Security Advisor provided to the Department of Justice.

Flynn is a good man and didn’t collude

Rep. Mark Meadows, R-NC, who has been at the forefront of Congressional investigations into the FBI’s handling of the Russia probe, told this reporter late Tuesday that it’s what’s not in Mueller’s recommendations that reveal “they didn’t have anything in the sentencing guidelines that show Flynn colluded with Russia.”

“It took nearly two years for Robert Mueller to come to the same conclusion that President Trump got to several months after Flynn was charged – that Flynn is a good man and didn’t collude,” said Meadows. Meadows noted that the term “substantial cooperation” is a legal phrase that is necessary to include in the sentencing recommendation “in order to get a reduced sentence from the court.”

“It’s not so much used as an adjective, as it is a noun,” said Meadows.

Rudolph Giuliani, Trump’s attorney and former Mayor of New York, told Fox News Tuesday night that the Special Counsel “are sick puppies. This whole thing started as an orchestrated attempt to take the president out of office as an insurance policy.”

“His distinguished career is finished and his reputation ruined,” Schoen said. “His experience with the Mueller team is classic. He had a strong case for an acquittal of any charge that he lied, based on the government’s own documents from his FBI interviews; but when the Mueller team turned the screws to Flynn and his family and with the cost of defending himself prohibitive, he chose the course of least resistance.”

If you play ball with Mueller and his band and tell them what they want to hear, you will be rewarded

Schoen noted that the sentencing memo “proves the conventional wisdom right – if you play ball with Mueller and his band and tell them what they want to hear, you will be rewarded.  And if you tell them the truth and that is not what they wanted you will be punished. It is as plain and simple as that.”

Mueller’s office gave some clues to Flynn’s cooperation writing, Flynn’s “early cooperation was particularly valuable because he was one of the few people with long-term and firsthand insight regarding events and issues under investigation by the [special counsel’s office]. Additionally, the defendant’s decision to plead guilty and cooperate likely affected the decisions of related firsthand witnesses to be forthcoming with the SCO and cooperate.”

Flynn served as head of the Defense Intelligence Agency, was credited by Mueller for his distinguished military career.

“Defendant’s military and public service are exemplary,” the memo stated. “He served in the military for over 33 years, including five years of combat duty, led the Defense Intelligence Agency, and retired as a 3-star Lieutenant General.”

“Senior government leaders” should be held to higher standards, the document stated.

Flynn’s sister, Barbara Flynn, posted a thank you to those who supported him over the past two years on Twitter Tuesday night.

“We just wanted everyone to know our family will be forever grateful for the outpouring of love, prayers & messages we have received today,” she said. “We are deeply moved and thankful.”

We just wanted to let Everyone know Our Family will be forever grateful for the outpouring of love, prayers & messages we have received today We are deeply moved and thankful. God Bless You! God Bless General Mike Flynn #FamilyForever #WWG1WGA 💖🙏🇺🇸🇺🇸🇺🇸 pic.twitter.com/ZEeDqTOlX0

Flynn was interviewed by FBI Special Agents Joe Pientka and Peter Strzok on Jan. 24, 2017 about conversations he had with former Russian Ambassador Sergey Kislyak in December 2016. According to former FBI Director James Comey, the agents did not believe Flynn was lying during their interview with him but later Mueller charged him none-the-less and eventually Flynn pled guilty in December 2017 to one count of lying.

Strzok, who not only was charged with the Russia investigation into Trump, was also part of Mueller’s Special Counsel probe. He was eventually removed from his role in the Special Counsel’s Office after it was discovered he had sent thousands of anti-Trump text messages to his alleged lover FBI attorney Lisa Page, Page, who was a close confidant of former FBI Deputy Director Andrew McCabe, retired from the FBI and struck a deal to testify before Congress in July. Her explosive testimony revealed that the FBI did not have any evidence as of May 2017 that anyone in the Trump campaign had colluded with Russia. McCabe was fired from the FBI for lying multiple times to investigators about his contacts with the media and leaking to the media.