List Of Obama Officials Involved In Unmasking Declassified, Expected To Be Public Soon 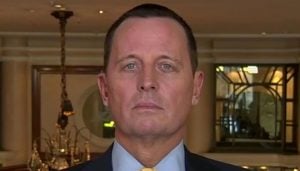 In 2017, information published by this reporter and John Solomon, then with Circa, a online news organization under Sinclair Media, exposed that former Obama national security advisor Susan Rice had unmasked a number of U.S. officials connected to then President Donald Trump’s campaign.

On Monday night, reports surfaced, first with ABC News and then others, that the acting Director Of National Intelligence Richard Grenell had authorized the declassification of the list of senior Obama officials that had unmasked Americans exponentially in the last months of the Obama administration.

A U.S. official familiar with the declassification process confirmed to SaraACarter.com that the list of officials has been declassified and should be made public shortly. In May, 2019 President Donald Trump authorized the Department of Justice to declassify the list, as well as all the other documentation pertaining to the Foreign Intelligence Surveillance warrant used to spy on short term campaign volunteer Carter Page. Department of Justice Inspector General Michael Horowitz revealed in several recent reports that the FBI and DOJ failed to validate the evidence used to obtain the warrants to spy on Page and omitted evidence that would have stopped the secret court from authorizing the warrant to spy on the campaign.

The most egregious unmasking was that of Army Lt. Gen. Michael Flynn, whose prosecution has now been overturned by the Justice Department. In January, 2017 Flynn’s name and the contents of his conversation with former Russian Ambassador Sergey Kislyak was revealed to a Washington Post reporter by a senior official in the Obama administration. The contents of the conversation were later outed in a column by Washington Post writer David Ignatius. The highly classified information led to the false allegations that Flynn and the Trump campaign were conspiring with Russia.

Still, no one has been held accountable for the highly classified leak. However, sources tell this reporter there has been an ongoing DOJ investigation into the matter.

Rice, who hid her role in unmasking Trump officials, eventually admitted that she had requested unmasking of officials in the campaign. However, it was in April, 2017, when Trump White House lawyers were informed that Rice had requested the identities of U.S. persons in the raw intelligence reports. Usually in the raw reports Americans are identified as U.S. Person 1 or U.S. Person 2. Those identities are considered top secret and are limited to only a few persons.

Further, there was an abundance of evidence that former United Nations Ambassador Samantha Power, unlike any former U.N. Ambassador before her, was also unmasking American’s identities in these highly classified reports at an extraordinary rate.

Then, in October, 2017, House Oversight & Government Reform Committee Chairman Trey Gowdy revealed that Power had admitted under testimony that not all the “unmaskings” attributed to her were made by her but instead were done by someone else who signed in her name. She allegedly made 260 requests to “unmask” Americans who had been in communication with non-U.S. citizens that were under surveillance. Recent testimony, declassified by Grenell has shown that to be the case and Power’s testimony coincides with Gowdy’s recollection of the events.

“I think if she were on your show, she would say those requests to unmask may have been attributed to her, but they greatly exceed by an exponential factor the requests she actually made,” said Gowdy, in October 2017 to Fox News.

On Monday night, Gowdy defended his previous role as Chairman, after being criticized by Rep. Matt Gaetz for failing to bring all the information forward to the American people during his time as Chairman. Gowdy said he shouldn’t have trusted the FBI.

He told “Tucker Carlson Tonight “we are going to find out what Russia did, with whom, if anyone, they did it, how to make sure they don’t do it again in 2020 and then the issue of unmaskings and leaks.’

“So, there were four pillars of what he wanted us to look at,” Gowdy added. “It’s just [that] nobody gave a damn about three of them. The only thing they cared about was the ‘with whom, if anyone.’ So we did, what, 60-70 witness interviews, the Senate [Intelligence Committee] did that much or more, and then we had [Special Counsel] Bob Mueller.