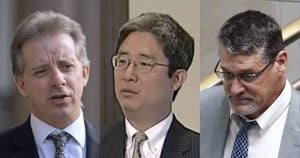 Department of Justice official Bruce Ohr used his position to funnel information produced by his wife on the now debunked dossier to target President Donald Trump and his campaign, according to more than 330 pages of documents obtained by Judicial Watch.

Clinton campaign operative Nellie Ohr may as well as have had a desk at the Justice Department, Tom Fitton

Justice Department Attorney General William Barr appointed Connecticut U.S. Attorney John Durham to investigate the FBI’s handling of its investigation into Trump and Russia. Over the past few years, more than a dozen senior FBI officials have either been fired, demoted or forced to retire after documents exposed bias, leaking and other malfeasance during the Russia probe.

“These documents show a crazed DOJ-FBI effort to use the Clinton spy ring at Fusion GPS, namely Nellie Ohr, to smear President Trump – even before he was sworn in as president,” said Judicial Watch President Tom Fitton. “Clinton campaign operative Nellie Ohr may as well as have had a desk at the Justice Department.”

Ohr’s wife Nellie, who was hired by Simpson because she is a Russia analyst, was also compiling her own dossiers on Trump. She used her husband to deliver the information to the FBI, as the documents suggest. Further the documents show that Nellie Ohr informed her husband that she was deleting emails sent from his DOJ email account.

In one email exchange between Steele and Ohr on July, 30, 2016, Steele asks if Ohr wants to speak to Simpson on ‘substantive issues/s.’

“Great to see you and Nellie this morning Bruce. Let’s keep in touch on substantive issues/s. Glenn is happy to speak to you on this if it would help,” writes Steele, who had visited with Ohr and State Department officials on a trip to the United States.

According to other documents, the information Nellie Ohr delivered to her husband in “included anti-Trump dossier materials, including a spreadsheet that tries to link President Trump to dozens of Russians.”

The spreadsheet, which is available to the public through the Freedom of Information Act, attempted  relationship descriptions and “linkages” between Donald Trump, his family and criminal figures, many of whom were Russians.

This list of individuals allegedly “linked to Trump” include: a Russian involved in a “gangland killing;” an Uzbek mafia don; a former KGB officer suspected in the murder of Paul Tatum; a Russian who reportedly “buys up banks and pumps them dry”; a Russian money launderer for Sergei Magnitsky; a Turk accused of shipping oil for ISIS; a couple who lent their name to the Trump Institute, promoting its “get-rich-quick schemes”; a man who poured him a drink; and others.

The spreadsheet wasn’t the only document Ohr sent to deliver to the bureau from his wife on Dec. 5, 2016. He also emailed himself a document titled “Manafort Chronology.”  The document focused on Paul Manafort, who was charged last year for not filing a FARA for his work with Ukraine.

In Nellie Ohr’s document, she details Manafort’s travel history and any “interactions with Russians and other officials,” Judicial Watch said.

The FBI’s 302 interviews with Ohr, show that during December, 2016, Bruce Ohr was “voluntarily” giving the reports written by his wife – to include the information on Trump and Manafort. Judicial Watch released the interview reports last week through a separate Freedom Of Information Act lawsuit.

Once the Russian’s got wind that Fusion GPS was digging into Trump’s ties with Russia, the Kremlin used it to create chaos in the United States. It was a relationship of convenience for both the Democratic opposition and the Kremlin

A slew of text messages between Bruce Ohr and his wife on Jan. 25, 2017, just after the debunked dossier is made public by BuzzFeed, reveal the nickname for the dossier given by Nellie Ohr: Yellow Rain dossier and Yellow Showers dossier.

The dossier contained salacious and unverified information about Trump. Suggesting he hired prostitutes to urinate on a bed in a Russian hotel room that was once used by former President Obama and his wife.  Steele admitted to a British Court last year that the information was never verified and that he didn’t actually believe it was true.

“The dossier is nothing more than Russian and anti-Trump disinformation,” said a former senior U.S. intelligence official, who worked as a Russia analyst. “Once the Russian’s got wind that Fusion GPS was digging into Trump’s ties with Russia, the Kremlin used it to create chaos in the United States. It was a relationship of convenience for both the Democratic opposition and the Kremlin.”

Judicial Watch notes that “the same set of forwarded texts, Nellie speculates that Department K of the Russian intelligence service FSB “would be a pretty good candidate for listening in on Hillary.”

Congressional officials investigating the FBI’s handling of the Russia investigation have pointed to these internal texts as examples that the bureau was doubling down on the same information to garner a Foreign Intelligence Surveillance Act warrant on Carter Page, a former Trump campaign volunteer.

According to the documents, “four months prior to this exchange, Kavalec had found Christopher Steele not credible because of factual inaccuracies that he had relayed to her in October 2016, as uncovered by Judicial Watch.”

On May 23, 2016, DOJ prosecutor Lisa Holtyn emails Bruce Ohr to see if he could connect her as well as prosecutors Joe Wheatley and Ivana Nizich with his wife, Nellie Ohr, as she could be a “great resource” for them. He replies, “I’m sure Nellie would be delighted to speak with them. I’m pretty sure there is no conflict of interest since they aren’t paying her or anything like that.” Congressman Mark Meadows suggested this email shows that Nellie Ohr “knowingly provided false testimony” to Congress she had no role in DOJ investigations.

Judicial Watch obtained the records through its August 2018 Freedom of Information Act (FOIA) lawsuit filed against the Justice Department after it failed to respond to a May 29, 2018, FOIA request  (Judicial Watch v. U.S. Department of Justice (No. 1:18-cv-01854)). Judicial Watch seeks:

In April, Judicial Watch received documents showing that Bruce Ohr in his January 2018 preparation to testify to the Senate and House intelligence committees wrote to a lawyer about “possible ethics concerns.” Bruce Ohr forwarded the email to Nellie Ohr, who had been hired by Fusion GPS, the Hillary Clinton campaign-Democratic National Committee vendor who compiled the anti-Trump dossier.

Judicial Watch also uncovered emails from Bruce Ohr showing that former Associate Deputy Attorney General Bruce Ohr remained in regular contact with former British spy and Fusion GPS contractor Christopher Steele after Steele was terminated by the FBI in November 2016 for revealing to the media his position as an FBI confidential informant.