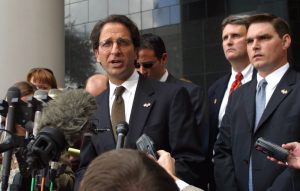 Andrew Weissman, Mueller’s deputy accidentally wiped his phone twice, “while entering wrong password.” While another lawyer, James Quarles, his phone “wiped itself” without his intervention.

These documents were released only after a two year lawsuit from the watchdog group Judicial Watch.

.@JudicialWatch first asked for this info. nearly two years ago and sued a year ago. Only now is this chart released to us…. https://t.co/vFV4QH8uuY