Johnson: Did another Federal law enforcement agency have access to Hunter Biden’s Laptop info before the FBI? 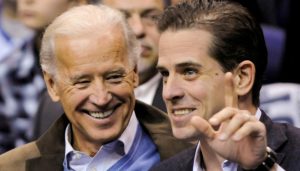 This story has been updated

In a letter sent on Oct. 17, Johnson asked Wray, whether or not the bureau has any information regarding the possibility that other law enforcement agencies may be aware of or possess information similar to the contents in Hunter Biden’s laptop. that was leaked in the explosive reports in the New York Post.

The question is significant and if the answer is yes, then other agencies may have been aware of information that required an investigation by law enforcement into the former Vice President’s son.

Johnson, who briefly spoke to this reporter Wednesday, said he has yet to get answers from Wray, noting his committee is working diligently to get answers to the circumstances surrounding Biden’s laptop and the information contained there-in. The letter failed to deliver, Johnson said.

Johnson’s request to the FBI came shortly after the exclusive exposes in the New York Post. Various emails published by The Post reveal possible shady transactions and business arrangements with foreign officials in exchange for Biden’s role as a paid board member of the Ukrainian natural-gas firm Burisma Holdings.

“There are numerous questions that still have yet to be answered,” said one source, familiar with the investigation into Hunter Biden’s laptop and the information it contained. “There were reports that a whistleblower was aware that another government law enforcement agency may have had access to Hunter Biden’s notes, laptop and other material while working on a case even prior to the FBI obtaining his laptops in December, 2019.”

“Basically, other law enforcement agencies may be involved in this investigation,” said the source without specifying the possible agency.

FBI officials told me that “we can confirm a response has been provided but we have no further comment, in keeping with our standard practice of neither confirming nor denying the existence of an investigation.”

The response from the FBI to Johnson referred him to the “Office of the Director of National Intelligence” [John Ratcliffe] who “advised the American public that, in advance of the 2020 election, a number of nation-states plan to use covert and overt influence measures in an attempt to sway voter preferences and perspectives, sow discord in the United States, and undermine the confidence of Americans in our democratic process.”

The letter did not directly address any of the questions asked by Johnson regarding the laptop and how the FBI obtained it, or whether or not the information contained there-in was legitimate.

“The FBI is the primary investigative agency responsible for the integrity and security of the 2020 election, and as such, we are focused on an array of threats, including the threat of malign foreign influence operations,” stated the FBI letter. “Regarding the subject of your letter, we have nothing to add at this time to the October 19th public statement by the Director of National Intelligence about the available actionable intelligence. If actionable intelligence is developed, the FBI in consultation with the Intelligence Community will evaluate the need to provide defensive briefings to you and the Committee pursuant to the established notification framework.”

“Finally, as the FBI advised the Committee in its letter, dated October 5, 2020, consistent with longstanding Department of Justice (Department) policy and practice, the FBI can neither confirm nor deny the existence of any ongoing investigation or persons or entities under investigation, including to Members of Congress,” the letter stated.

Hunter Biden was known for his penchant to use narcotics and drink, whether another agency, such as the DEA, was in possession of any information is not public “but it is something that the Senator should investigate,” said a U.S. official, who spoke on condition of anonymity as they were not authorized to speak on the matter.

The Hunter Biden information published by the New York Post, however, was explosive, ranging from alleged sexual escapades, photographs, videos and emails discussing the Biden family finances and dealings overseas.

One example, was an email sent to Hunter Biden in 2015, where a senior executive of Burisma is thanking the vice president’s son for providing the “opportunity” to meet with Joe Biden.

In the letter to Wray, Johnson states that he and his colleague Chairman of the Senate Finance Committee Chuck Grassley received the information regarding Hunter Biden’s laptop after they published their joint report in September, “Hunter Biden, Burisma, and Corruption: The Impact on U.S. Government Policy and Related Concerns.”

Johnson told Wray that the whistleblower informed the Senator’s that he provided the “contents to the Federal Bureau of Investigation (FBI) in response to a December 9, 2019 grand jury subpoena.”

“As the first step in our due diligence, committee staff contacted FBI officials and asked for confirmation of certain facts in an attempt to validate the whistleblower’s claims and assertions,” stated Johnson in the letter. “Unfortunately, several days later, the FBI responded that it would not confirm or deny any information identified by the committee even though several of our questions were not related to the possible existence of an ongoing grand jury investigation.”

“I have a responsibility to validate and verify the contents of any information produced to my committee,” said Johnson. “The committee must know if it receives information that could be fraudulent or not accurate.”

Johnson said in the letter that his staff informed the FBI that “this information is crucial for several reasons. For example, if any information offered to the committee was linked to a foreign adversary’s attempt to interfere in the election, I would expect the FBI to ensure the committee is protected and receives a defensive briefing. Similarly, knowingly providing false information to Congress is a crime, and I would expect the FBI to have informed me if, after having been given notice of what we received, this may have occurred. That is precisely why my staff reached out to the FBI.”

1. Does the FBI possess material from Hunter Biden’s laptop(s)? If yes, how and when did the FBI obtain this information?

a. If so, please explain when and how the FBI obtained this information and what, if any, steps it took to investigate and authenticate that material.

a. If so, what other agencies have this material and how did those agencies obtain it?