The New York Times published an antisemitic cartoon in its Thursday, April 25 international edition. Even Bret Stephens, one of the Times’s best-known Jewish writers, described the cartoon in a column several days later as antisemitic. The cartoon touched off a firestorm of criticism.

The response to the cartoon was a hundreds-strong protest held Monday night in front of the NYT building. The protest was organized in 24 hours. One of the organizers and the event master of ceremonies, Manhattan businessman Jeffrey Wiesenfeld, said to this reporter shortly before the protest: “this cartoon uncorked pent-up anger against the New York Times, I’m hearing from people who say they’ll be here [at the protest] whom I haven’t heard from in years.”

BLIND, BLOATED TRUMP BEING LED BY NETANYAHU-DOG
The cartoon depicted a bloated and blind U.S. President Donald J. Trump wearing a kippah (Jewish headcovering), being pulled along by a dog with the face of Israeli Prime Minister Benjamin Netanyahu. The dog’s collar has a Jewish Star dangling from it. Portraying Jews as dogs or other animals is a classic dehumanizing, antisemitic theme.

The New York Times plays a peculiar and outsized role in American Jewish life. The Ochs-Sulzberger family are the founders and still controlling shareholders of the paper. That family, of Jewish origin, took great pains to leave behind their religion of birth through conversion and also through use of their paper.

Books have been written detailing how The New York Times downplayed the Holocaust by hiding stories about it in back pages or ignoring it altogether. The paper is regularly criticized by leading media watchdog groups as a ferocious and biased critic of Israel which frequently gets its facts wrong. A heavily-footnoted book was recently published on the subject by an historian, Jerold S. Auerbach, who has documented years of antagonism in the NYT against the Jewish State.

At the same time, the New York Times is frequently considered nearly holy writ for Jews, especially non-religiously observant ones. It is one of the major non-religious flashpoints between two kinds of Jews: those who identify as Jewish primarily as a social matter, for whom “social justice” constitutes their form of observance, and those who base their Judaism on religious observance and study and who are ardently pro-Israel. The first group reveres the NYT while many in the second complain bitterly about how the paper is egregiously anti-Israel and anti-Semitic. Those in the second group are pointing out to those in the first that this cartoon reveals the true face of contempt for Israel at the NYT.

“What wasn’t horrible about that cartoon?” asked Hillary Barr, a founder of Mothers Against Terrorism and one of the organizers of Monday’s rally.

NYT BLAMES MISTAKE ON “LONE WOLF EDITOR”
Barr said the purpose of the rally was to tell the NYT that it needs to fire the editor who chose to put the antisemitic cartoon in the paper. Barr sneered at the hypocrisy of the Times. She recounted that two days after the cartoon was published, the paper released a statement claiming there was an “error of judgment” and tried to pass off the cartoon as one editor’s mistake. A full 24 hours after the first statement, in the face of a still-rising chorus of condemnation, the paper finally issued what it called an “apology,” but refused to state what would happen either to the “single editor” who made the mistake or to discuss any changes that would be made to prevent a future recurrence. “We’re not idiots,” Barr growled.

When asked about the use of Trump in the cartoon, Barr was sure the paper felt they got in a “twofer” – pointing out that the Times is not only virulently anti-Israel, but also rabidly anti-Trump.

HARKENS BACK TO NAZI PROPAGANDA
Both Barr and Wiesenfeld said that there should be an external, fully independent investigation into how the cartoon was chosen and approved to run in the paper. Several in the protest crowd said that in addition to firing the editor who chose the cartoon, they wanted apologies, including, according to New Yorker Rose Thompson, “a detailed accounting of why and how this happened.” Thompson said when she first glanced at the cartoon, she “thought it was a Nazi-era reprint.”

Thompson was not the only one who raised the Nazi analogy. Rob Kabakoff, another New Yorker in the crowd on Monday said disgustedly, “This is not Berlin in the 1930s,” and Joe Diamond said, “I thought I woke up in 1934 Germany.”

Former New York State Assemblyman Dov Hikind spoke to the crowd during the protest. He said the New York Times must do three things: apologize to President Trump, apologize to Prime Minister Netanyahu, and apologize to the Jewish people.

At Monday afternoon’s protest, people chanted “shame on you,” directed at the NYT. Many dozens of people held Jewish and American flags and hoisted signs emblazoned with “Anti-Israel, Anti-Semitic, NYT Guilty” and “Different Times, Same Anti-Semitism,” in which a political cartoon from the 1940’s shows Winston Churchill being led by the hand by a large obviously Jewish man with sidecurls and black hat. 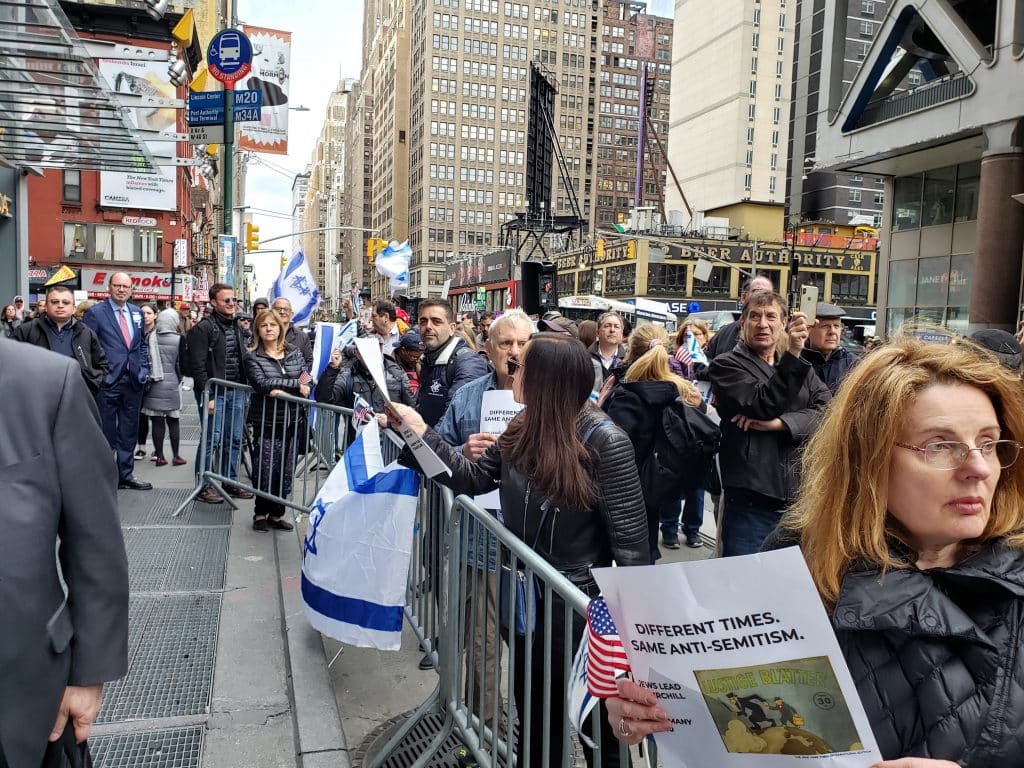 Perhaps the reason why the New York Times has so far refused to ensure they will not run a cartoon like the April 25 one is that they fully intend to continue running such cartoons. In the edition of the paper which ran the same day as the protest took place there was yet another cartoon of Netanyahu. This one showed the Israeli Prime Minister as if he were claiming to be Moses, wearing sunglasses, taking a selfie and holding a “tablet” with a picture of the flag of Israel on it.

THERE GO THOSE DARN NYT EDITORS AGAIN
The April 25 cartoon certainly hit a nerve. But in a news article that ran in the Times the very next day, readers were informed that “Jesus was a Palestinian.” Enough scholars must have pointed out this historical impossibility because the paper ran a small correction which claimed: “Because of an editing error, an earlier version of this article referred incorrectly to Jesus’s background. While he lived in an area that later came to be known as Palestine, Jesus was a Jew who was born in Bethlehem.”

Written with assistance from Deane Gross in New York.