Hillary Clinton: Trump Is a ‘Clear And Present Danger’ 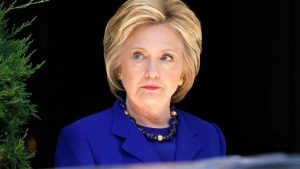 The president of the United States has betrayed our country.

That’s not a political statement—it’s a harsh reality, and we must act.

He is a clear and present danger to the things that keep us strong and free.

Clinton, however, is under scrutiny as well for what appears to be her own financial dealings with foreign nations. One example, involved her husband former President Bill Clinton and her role during her time as Secretary of State in assisting Swiss Bank UBS  during its banking scandal with the IRS.  In 2009, Clinton intervened on behalf of UBS bank when she was Secretary of State. She assisted in cutting a deal for bank. The deal forced the bank turn over only 4,450 accounts for the IRS to review out of the 52,000 accounts sought by the IRS. The Wall Street Journal was the first to report the story. Despite criticism, however, her husband was later paid $1.5 million in speaking fees from UBS bank.

Here is the full, unredacted transcript of President Trump’s call with the President of Ukraine: https://t.co/DsD2NI4Azr

The White House released the transcript of the phone call where the deal was allegedly discussed earlier Wednesday. The transcript of the call revealed no such quid-pro-quo arrangement however, President Trump did express concern with Biden’s son and asked President Zelenskyy to work with Attorney General William Barr to look into it. There was zero discussion of payment.