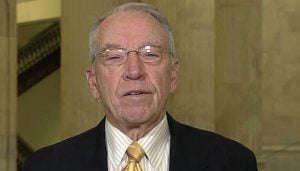 Yet, the Biden Administration has not commented on the situation. Grassley, along with other senators, sent a letter to President Biden early last week to ask him to investigate Kerry. That letter went unanswered.

Now, as ranking member of the Judiciary Committee, Grassley is asking that records regarding meetings Kerry had with Zarif be sent to the committee for review. His deadline is May 18th.

RELATED: Chip Roy says John Kerry should resign ‘because he is a fool’, dangerous to US and Israel

“President Biden has the power to act and so do you,” Grassley writes in the letters.

But, when this reporter reached out to the State Department Inspector General for comment, a spokesperson said “We have no additional information to share at this time.”

The State Department echoed the empty statement. “The department respects the role of congress and does not comment on congressional correspondence,” a State Department spokesperson told SaraACarter.com

Many calls for action have gone unanswered. While some have asked that Kerry resign from his current position as presidential envoy for climate on the National Security Council, others like Rep. Andy Biggs (R-AZ) are simply asking that Kerry’s security clearance be temporarily suspended while he is investigated. So far, nothing has changed.