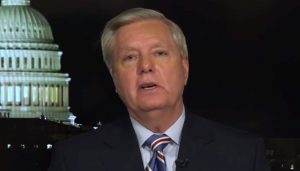 “It is clear to me the Biden Administration has lost control of the border,” Graham said. “Under its current leadership, it doesn’t have either the will or capability to fix the problem.”

Mayorkas says the current migrant surge will likely result in the largest number of border crossings at the U.S.-Mexico border in 20 years. Moreover, Mayorkas testified before the House Homeland Security Committee Wednesday and was grilled by Republican lawmakers over his refusal to call the issue a “crisis.”

Since President Biden’s inauguration, the administration has taken steps to reverse many of the Trump administration’s immigration policies. That includes implementing a 100-day moratorium on deportations, reversing the ‘Remain in Mexico’ policy, and halting the construction of the border wall.

According to Graham, however, those policies aren’t solutions to the ongoing problem rather they are ‘a mistake.’

“The solutions are obvious but will require an understanding that the Biden Administration’s early policy choices – to abandon Trump’s successful border policies – was a mistake,” Graham explained.

“It is time for DHS Secretary Mayorkas to change course or change jobs,” Graham said, adding “The situation is bad and only going to get worse.  Unless there is immediate and drastic change, the worst is yet to come – by far.”

The Department of Homeland Security didn’t immediately respond to this reporter’s request for comment.