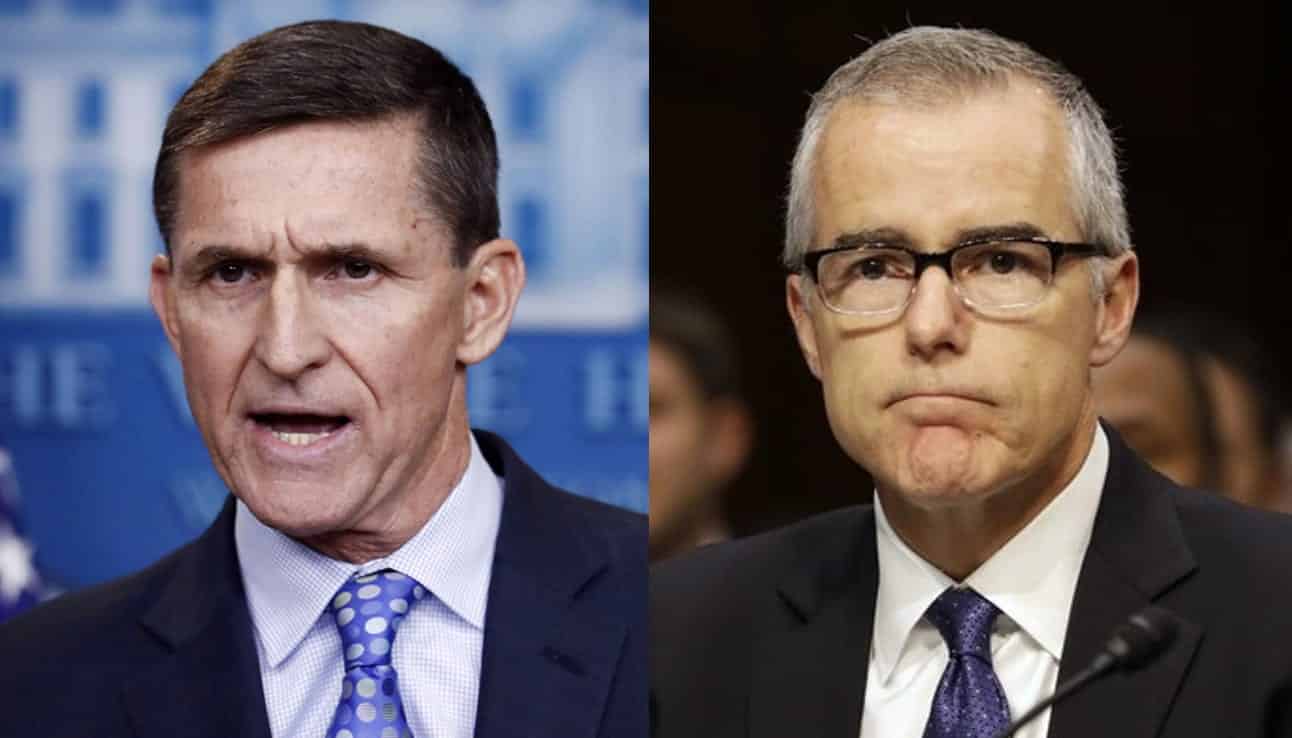 Justice Department prosecutors have recommended up to six months of prison time for former national security adviser Army Lt. Gen. Michael Flynn and it is a recommendation that sends a chilling message to defendants who don’t comply- regardless of truth – with the government, according to defense attorney Sidney Powell.

It was a stunning reversal from recommendations made by prosecutors last year and it is outrageous.

“if you don’t do what government prosecutors want, even if they want you to lie, you’re going to do prison time,” Sidney Powell

The prosecutors memo Tuesday stated that “given the serious nature of the defendant’s offense, his apparent failure to accept responsibility, his failure to complete his cooperation in—and his affirmative efforts to undermine—the prosecution of [ex-Flynn associate] Bijan Rafiekian … the government recommends that the court sentence the defendant within the applicable Guidelines range of 0 to 6 months of incarceration.”

Prior to Tuesday’s reversal the prosecutors had requested that Flynn “receive a sentence at the low end of the Guidelines range.” In fact, prosecutors had asked the courts that Flynn not serve any prison time earlier. They stated that his cooperation in Special Counsel Robert Mueller’s probe, as well as other federal cases was sufficient and warranted leniency.

Now, the prosecution is suggesting that Flynn made some sort of deal to testify against his former associate Rafiekian. Flynn was going to testify in the case “until the government insisted he lie about the FARA” filing, said Powell. Therefore, he didn’t testify because he wasn’t going to say what the government wanted him to say.

Rafiekian had been indicted on two criminal counts, including conspiracy to act as an agent of a foreign government, according to the original unsealed indictment. Rafiekian’s conviction was overturned by the court citing that prosecutor’s had ‘insufficient evidence’ to prove their case.

In fact, Flynn Intel Group, had filed a Lobbying Disclosure Act (LDA) registration with the government on Sept. 15, 2016 and disclosed their work with Inovo BV, a private company the U.S. prosecutors charged was connected to the Turkish government. Rafiekian used attorney Robert Kelley, who filed the LDA with the Secretary of the Senate and Clerk of the House, as required by law.

Flynn, nor the Flynn Intel Group, ever tried to hide their ties to the private company Inovo BV because the LDA was filed in September, 2016.

In fact, Rafeikan had asked Kelley to originally file a FARA for Flynn Intel Group, but it was Kelley who advised Flynn Intel Group that a FARA wasn’t needed. He noted that because  Inovo BV was neither a foreign government or a foreign political party only the LDA was needed, according to his own testimony under questioning by the defense.

Kelley, who was an attorney with Waterman acted as the general counsel for Flynn Intel Group at the time, said under questioning in the Eastern District Virginia Court that he told Rafiekian “You don’t have to register a FARA. You can register at LD – Lobbying Disclosure Act in the Congress.” The Lobbying Disclosure Act, was passed in 1938 by Congress and it is a disclosure act that allows U.S. firms to deal with foreign private companies in business.

By mid-November, 2016 Flynn was named National Security Advisor and he shut down his company and ended the contract with Inovo BV.

However, the government went after Flynn demanding that he needed to file a FARA, even though by law an LDA was sufficient enough disclosure, according to a letter Kelner submitted on March 7, 2017 to Heather Hunt, with the Foreign Agents Registration Act office.

Flynn Made No Deal To Testify Against Rafiekian

As for Flynn’s role in Rafiekian’s case, he made no deal to testify against his former associate. In fact, he told prosecutors that he would only state what is factual and true.

That wasn’t enough, according to the prosecutors memo. Why? Because in the end they had no case against Rafiekian, unless Flynn testified against him. The charges against Rafiekian were overturned by Eastern District of Virginia Court Judge Anthony Trenga.

Trenga noted at the time of  his decision that the prosecution did not present sufficient evidence “as a matter of law for the jury to convict Rafiekian on either count.”

Further, Flynn’s defense attorney Sidney Powell argued in her August, 2019 response to the government that Flynn had ‘fully’ cooperated with prosecutors for two years. In the Eastern District he spent more than 30 hours with prosecutors and during that time alone “incurred hundreds of thousands of dollars in legal fees,” stated her response. Moreover, she stated in her response regarding Rafiekian that “the government raised new questions, to which Mr. Flynn gave truthful answers the prosecutors did not like.”

Powell said in August, with regard to the FARA filing, “Neither he, nor the Statement of Offense, recited that he authorized the filing knowing or intending it to be false. He cannot acquiesce to the government’s demand for that testimony, because it is not true.”

On Tuesday, Powell told this reporter the prosecution’s memo to incarcerate Flynn is “sickening.”

“The government seeks to punish General Flynn for refusing to lie for the prosecution in the (Bijan) Rafiekian case,” said Powell. “This is a sickening statement by the Department of Justice.”

She told SaraACarter.com that the prosecutions recommendation to jail Flynn threatens defendants, “if you don’t do what government prosecutors want, even if they want you to lie, you’re going to do prison time.”

It certainly appears to be the case for Flynn, who had been a life-long Democrat and who served his country in the military with distinction for 33 years, made the greatest of enemies when stood up to the Obama Administration and the CIA.

Flynn built a myriad of enemies and in the end they targeted him with a vengeance. Certainly joining the Trump campaign brought him in direct confrontation with those enemies who spread malicious lies about him in the media and wanted to remove him from his senior position at the White House.

First, Justice Department prosecutors are basing their claims that Flynn lied to FBI investigators during their investigation regarding his telephone communications with former Russian Ambassador Sergey Kislyak is flimsy and weak. Even the agents who interviewed Flynn, including anti-Trump FBI Special Agent Peter Strzok, didn’t believe that he lied. Ironically Former FBI Director James Comey admitted that the agents didn’t believe Flynn lied but we know now that almost everyone at the bureau involved in targeting Flynn did.

In fact, Comey, who laughed callously as he described his operation to send the agents to question Flynn without going through the appropriate channels, was himself referred to the Justice Department for prosecution by Inspector General Michael Horowitz. Horowitz’s investigation revealed that Comey’s lying and leaking information to the press of “sensitive information”  had “set a dangerous example” for the bureau. The Justice Department declined to prosecute on those charges but Durham’s investigation could pull Comey back into other possible charges.

It is true that Flynn pleaded guilty to one count of lying but only after prosecutors squeezed Flynn dry. They threatened to bring charges, however erroneous, against his son if he didn’t cooperate. Further, Flynn has spent millions he didn’t have defending himself and had to sell his home, among other valuables.

Let’s get one thing straight, the majority of those FBI and DOJ officials originally involved in investigating Flynn were absolute liars and many have been fired or removed from their position.

Strzok, who interviewed Flynn was fired for lying. Former FBI Director Andrew McCabe, who along with Comey, both who originally targeted Flynn, was fired by former Attorney General Jeff Sessions for lying multiple times to Horowitz’s team. He has been referred to the DOJ for prosecution and faces possible prosecution.

Former CIA Director John Brennan, along with other CIA officials, are being questioned by Durham. Brennan lied to Congress when in the spring of 2017, he told the House Intelligence Committee that Steele’s dossier played no role in the creation of intelligence community assessment on Russian interference. It was not true and we know this now based on Horowitz’s report.

Former National Security Advisor James Clapper has also been caught lying to Congress, when he told lawmakers in 2013, that the National Security Agency was not collecting information on Americans. Guess what? He later admitted that he was lying and as for his role in the Trump probe, he is believed to be the person to have leaked the meeting in January, 2017 where Trump was informed of the salacious fake dossier.

Congress had reason to believe that Clapper gave the information to CNN and shortly after he took a paid job with the network as an analyst.

I could go on and on, but you understand where I’m going with this analysis.

Flynn is a war hero and dedicated his life to his country. He is now facing a possible jail sentence on Jan. 28, when he appears before Judge Emmet Sullivan’s court.

What a sad day in America when justice is not served.

On one side of the Washington D.C. swamp, known and proven liars are making large sums of money off of books, television appearances and speaking engagements. While on the other side of town, a man who did nothing more than fight for his nation is paying the ultimate price at the hands of enemies.