Virginia Governor Ralph Northam canceled an upcoming speech due to threats of protests. According to NBC Washington, members the of Fairfax County NAACP and the state Republican Party planned to mobilize before the event.

The Washington Post reported that Northam planned to speak at his alma mater Virginia Military Institute’s commencement ceremony. According to the paper, a spokeswoman for the governor confirmed the news saying the decision was “out of concern he would pull focus from the achievements of graduates and their families.” Moreover, he said Northam is ruling out any commencement speech in Virginia. 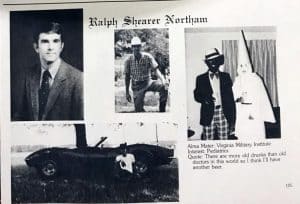 “This behavior is not in keeping with who I am today and the values I have fought for throughout my career in the military, in medicine, and in public service,” said Northam. “But I want to be clear, I understand how this decision shakes Virginians’ faith in that commitment.”

The governor later rescinded saying it wasn’t him in the photo and remains Governor of Virginia.

Democrat Governor Ralph Northam of Virginia just stated, “I believe that I am not either of the people in that photo.” This was 24 hours after apologizing for appearing in the picture and after making the most horrible statement on “super” late term abortion. Unforgivable!