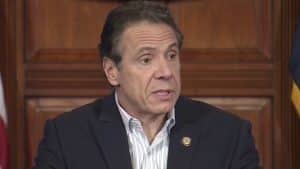 At a Monday press conference when discussing how it has been difficult to enforce Coronavirus rules in New York City Orthodox Jewish communities, who have been badly hit by the recent outbreaks in parts of the city, Gov. Andrew Cuomo (D-N.Y.) displayed a photo depicting a large synagogue gathering–except, the photo was taken 14 years ago.

Cuomo’s office has since apologized, saying that: “This was a staff error that was caught in real time at the presser. It was swapped out with this photo that was taken two weeks ago at the same location. The new slide was up during the last 10 minutes of the press conference.”

Cuomo’s office also responded to SaraACarter.com earlier saying, “it was a staffer mistake that was caught in real time and swapped out with the intended image.”

His office also stated “we regret the mistake.”

Nonetheless, this error received fierce backlash from anti-Semitism and Jewish advocate groups. Liora Rez of Stopantisemitism.org had some stern words for the Governor.

“By using a picture of Jews gathered at the funeral of Rabbi Moshe Teitelbaum (Z”L) from 2014 during his COVID-19 press conference,” Rez said, this “shows how low him and NYC Mayor Bill de Blasio are willing to go to fan the flames of antisemitism in a city where Jews make up over 50% of all hate crimes reported.”

Gov. Cuomo said at the same Monday press briefing that he will be meeting with leaders of New York’s Orthodox Jewish community on Tuesday.