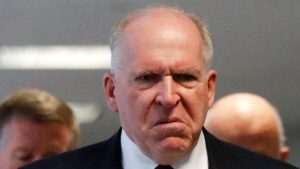 McRaven, who was commander of the U.S. Joint Special Operations Command (US JSOC) from 2011 to 2014 and oversaw the bin Laden raid, targeted Trump in his op-ed, writing,  “Through your actions, you have embarrassed us in the eyes of our children, humiliated us on the world stage and, worst of all, divided us as a nation.”

McRaven defended Director Brennan as a “man of unparalleled integrity” and wrote, “I would consider it an honor if you would revoke my security clearance as well, so I can add my name to the list of men and women who have spoken up against your presidency.”

THE SHOOTDOWN OF EXTORTION 17

The Vaughn’s son, U.S. Navy SEAL Aaron Vaughn, was killed on August 6, 2011, when his CH-47 Chinook helicopter (call sign, Extortion 17) was shot down in Wardak province in eastern Afghanistan. In all, 30 Americans died in the attack, 17 of whom were elite Navy SEALs. The shoot down, which occurred just months after the bin Laden raid, was the largest single-incident loss of life in the war in Afghanistan.

The aftermath of this tragedy, although not widely linked to McRaven, occurred under his leadership. He was promoted to U.S. JSOC just two days after the shooting.

The downing of Extortion 17 has been shrouded in secrecy, leaving the Vaughns with many unanswered questions about the night their son was killed. One whistleblower, retired Air Force Captain Joni Marquez, claimed the government covered up evidence that the shooting could have been prevented had it not been for the restrictive rules of engagement from the Obama Administration.

THE VAUGHN’S SCATHING RESPONSE TO MCRAVEN

On January 4, 2013, McRaven met with the Vaughns to discuss Extortion 17. In his book, Betrayed: The Shocking True Story of Extortion 17 as Told by a Navy SEAL’s Father, Billy recalls his meeting with the admiral, writing about heated exchanges with him over details of the shoot down.

He also claims that McRaven–who emphasized he did not want their meeting to be “political” — continued to praise President Obama throughout a discussion with his family.

In a statement to SaraACarter.com, the Vaughns wrote:

Mr. McRaven has publicly exposed his true colors. While most see him as an esteemed man in uniform, our personal experience led us to view him through a much different light…
When we began to speak publicly about the facts we had collected regarding the shoot down, we experienced severe intimidation from military leadership who, at that time, served at the pleasure of Admiral McRaven. The accusation? We were being “political.” And you never mix military service and politics. Never. Imagine the irony, in our eyes, to read McRaven’s current letter to our President, using his voice as the former Commander of USJSOC.

He could not be more political. He’s confronting a sitting President, making a blanket statement that President Trump has “embarrassed us in the eyes of our children.” Well, sir, our children aren’t embarrassed. Our son would have been proud to have served under this Commander in Chief and quite frankly, might still be alive today if he had.
You, Mr. McRaven, have no right to speak for Americans in general.

The facts have shown that Mr. Brennan is a bad actor. To defend him as you have makes us wonder if you are possibly posturing for something significant? Maybe the nation should take a closer look at your motives, sir, as we have been forced to do as a family.

As a matter of national security, what you just did is actually unforgivable

In addition, while we were being scorned for discussing the shoot-down of Extortion 17, we were told repeatedly that we could be hurting operational security for those still fighting on foreign soil. But nothing, sir, could have caused greater risk to that community than what you’ve just done. As a matter of national security, what you just did is actually unforgivable.

You’ve made the statement that you would be honored to have your security clearance revoked by our President. If you’re truly a man who stands for what you believe, do the honorable thing and turn in your security clearance on your own. We’re all tired of the grand-standing. We’ve been listening to the leftists and Marxists tell us for years that if they don’t get what they want they’ll leave our country, but yep, they’re still here. Enough already.