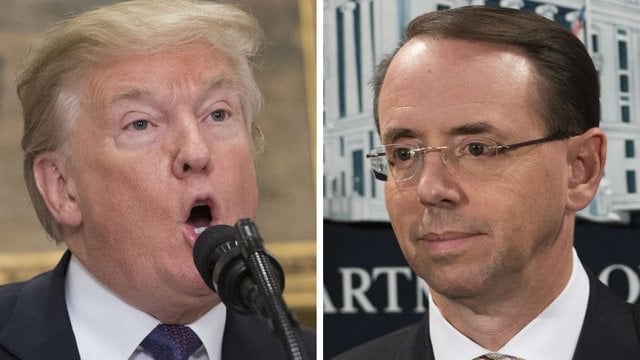 On Thursday, Republican lawmakers heard testimony for a second time from former FBI General Counsel James Baker in a closed-door session. The interview focused mainly on allegations that Deputy Attorney General Rod Rosenstein was “serious” about secretly recording President Donald Trump and that he consulted with several other administration officials about invoking the 25th Amendment, said sources with knowledge of the testimony.

Baker resigned in May from the bureau after he came under intense scrutiny by lawmakers when it was discovered that he possibly disclosed classified information to journalists. As the former top lawyer for the FBI, Baker was a close confidant of former Director James Comey.

Baker’s testimony several weeks ago before the House Judiciary and Oversight and Government Reform committees (both of which are leading a joint investigation into the bureau and Department of Justice) was described by lawmakers as “explosive.”

Thursday’s testimony was considered just as explosive as the former lawyer went into detail about why he believed that Rosenstein was not joking around when he told former FBI Deputy Director Andrew McCabe and former FBI Lawyer Lisa Page that he wanted to secretly record Trump. The pair also informed Baker that Rosenstein had discussed the possibility of invoking the 25th Amendment under the guise that Trump was “unfit” to serve as president, according to his testimony.

In May 2017, then Deputy Director McCabe and Page had a private meeting with Rosenstein in which the two former FBI officials discussed various concerns regarding President Trump, who had just fired Comey. However, it was Rosenstein’s memo to Trump that month, which outlined the various reasons Comey should be fired.

“(Baker) told lawmakers that he knew Rosenstein was serious based on McCabe’s ‘words and actions’ after their meeting with (Rosenstein),” said a source with direct knowledge of the closed-door hearing Thursday. The sources did not disclose what actions McCabe took to follow through with their discussion to record Trump secretly. Baker was not in the meeting with Rosenstein, but took ‘seriously’ what was being discussed with him, said sources with knowledge of his deposition.

“It’s time that Rod Rosenstein steps down. He should do so immediately,” said Meadows. told reporters,

He noted the deputy attorney general’s lack of “candor” and accused Rosenstein, who gave an interview with the Wall Street Journal last week, of avoiding questions from lawmakers who called on him to testify under oath about the issue.

A DOJ official claimed Rosenstein was using sarcasm after the New York Times published the account that the Deputy Attorney General was considering secretly recording Trump.

Rosenstein issued a statement to the New York Times before its publication saying,”The New York Times’s story is inaccurate and factually incorrect. I will not further comment on a story based on anonymous sources who are obviously biased against the department and are advancing their own personal agenda. But let me be clear about this: Based on my personal dealings with the president, there is no basis to invoke the 25th Amendment.”

Moreover, Baker’s testimony provided lawmakers with better insight into both the DOJ and FBI’s unusual efforts to spy on Carter Page, a short-term volunteer for the Trump campaign and the concern that the bureau violated policy and withheld exculpatory information from the secretive Foreign Intelligence Surveillance Court.

Rep. Jim Jordan, R-Ohio, told reporters after Baker’s first deposition that his testimony was “completely new,” He said the information focused on “the time that the DOJ and the FBI were putting together” the application to spy on Page. The lawmakers, however, have remained quiet on the details surrounding Baker’s testimony for now.