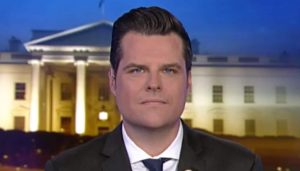 A former staffer for GOP Rep. Matt Gaetz (Fla.) has slammed the allegations against the congressman, and said that two FBI agents questioned him last week, after news of the Department of Justice’s investigation into Gaetz’s alleged sex-trafficking broke.

Gaetz has denied the allegations.

Nathan Nelson, a former director of military affairs for Gaetz, told reporters during a Monday press conference that when agents visited his home to question him, they made it appear that they thought Nelson resigned due to him having knowledge of the congressman’s involvement in illegal conduct.

“I’m here to state this morning that nothing could be further from the truth,” Nelson said at the press conference held in northwest Florida. “Neither I, nor any other member of Congressman Gaetz’s staff had any knowledge of illegal activities.”

“This baseless claim against me leaves me further convinced that the allegations against Congressman Gaetz are likewise fabricated and merely an attempt to discredit a very vocal conservative,” Nelson said at the conference put together by Gaetz’s office.

While stating that he continues to be “loosely affiliated” with the congressman’s office as an unpaid adviser, Nelson said that he informed Gaetz’s office that he had talked with FBI agents, but that he has not spoken to the congressman personally in months.

The same day as the Nelson press conference, Gaetz published an op-ed in The Washington Examiner defending himself again, writing, “I am a representative in Congress, not a monk, and certainly not a criminal.”