Fmr. Antifa Member: A lot Of The Group’s Mainstream Supporters Are Democratic Left 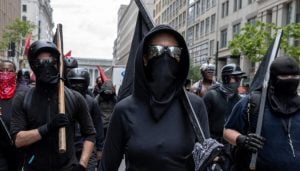 Former Antifa member Gabriel Nadales was a liberal activist who joined Antifa because was inspired by their rallies and their efforts to take up a “righteous cause” which was a fight against fascism, he told “Fox & Friends” Friday.

“Antifa is an organization that is made up of several different radical leftist organizations. They pretend that they’re fighting against fascism, which is in the name Antifa, Antifascism,” Nadales explained. “But, unfortunately, Antifa is not really fighting against fascism. They’re willing to fight anybody who does not share their leftist radical mentality of socialism and communism.”

The violent riots that have recently erupted across the U.S. in the aftermath of the tragic death of George Floyd haven’t happened by coincidence, he said, pointing to where the riots began in St. Paul, Portland, Los Angeles, Chicago, Austin, which are all “where Antifa has been allowed to operate for years, sometimes uncontested.”

“They started the riots and then normal Americans joined in as well.”

“Antifa used to be this movement that nobody really knew about, but now, it has mainstream supporters. And a lot of them are in the Democratic left.”

Attorney General William Barr said Thursday that there is evidence that the militant-anarchist group has a role in the riots of recent days. He said Thursday, “We have evidence that Antifa and other similar extremist groups, as well as actors of a variety of different political persuasions, have been involved in instigating and participating in the violent activity. And we are also seeing foreign actors playing all sides to exacerbate the violence.”