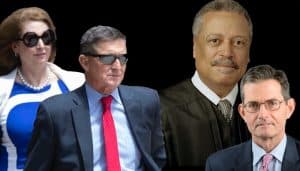 Former National Security Advisor Michael Flynn’s defense team slammed U.S. District Court Judge Emmet G. Sullivan’s request Monday asking the federal appeals court to reevaluate whether his court will be forced to drop the case against Flynn. It has been a months long battle for Flynn’s defense team against Sullivan, who has refused to drop charges against the three star general, even after the Justice Department made the request and mounting evidence has revealed Flynn’s innocence.

Flynn’s defense lawyer Sidney Powell entered the motion on Monday, stating that Sullivan’s “court exceeded its constitutional authority by appointing amicus to work against General Flynn after the parties agreed to dismissal. The Constitution and all precedent applying or analyzing Fed. R. Crim. P. 48(a) mandate dismissal on the robust substantive motion of the government—every case. Even if this were an issue of first impression, this Court has held that “mandamus is appropriate” where there is “a substantial allegation of usurpation of power.”

Powell, who has been noted for her extraordinary work in exposing corruption at the highest level of government in Flynn’s case, pointed to a number of mistakes and false statements made in Sullivan’s request to the appeals court to keep Flynn’s case ongoing.

“Sullivan has no standing to file the petition…and he is supposed to be neutral,” stated Powell. “No federal circuit has ever countenanced such a filing.”

“Judge Sullivan completely ignores the massive motion to dismiss and knew evidence filed by the government- and all Flynn’s filings. The evidence shows there was NO CRIME,” stated Powell.

Moreover, Sullivan cannot “appoint amicus here, and the motion to dismiss must be granted instanter. Game over.”

“The case is over. It must be dismissed,” she added.

She isn’t the only one critical of Sullivan. Sullivan’s refusal to drop the case against Flynn is beyond bizarre and reveals the lengths to which his actions appear to be motivated by politics.

As stated in a recent column by Fox News legal analyst and author Gregg Jarrett: “Sullivan had no authority under the Constitution to usurp the power of a separate branch of government. In simple terms, when the executive branch determines that the case is dropped, a judge cannot suddenly abdicate the bench, shed his robe, and appropriate by fiat the role of a prosecutor. The D.C. Circuit Court could have issued their ruling in five simple words: ‘Stay in your lane, Sullivan.’”

Last month, the U.S. Court of Appeals for the District of Columbia Circuit ordered Sullivan to follow the law by dismissing the false statements case brought by former Special Counsel Robert Mueller’s prosecutors against Flynn. The move came after mountains of evidence discovered by Powell, along with DOJ appointed U.S. Attorney Jeffery Jensen, revealed that the FBI did not believe Flynn had committed any crimes. The evidence also exposed what appears to be extraordinary political motivations by former senior Obama Administration officials in targeting Flynn and the Trump campaign in 2016.

Despite all the evidence mounting against government officials, Powell stated that Sullivan’s request to continue the case against Flynn is mired in false accusations in his motion to the appellate court. For example, “Sullivan did not have adequate time to consider and decide the Government’s motion. That is false. Sullivan denied two Flynn motions opposing allowing ANY amicus and requesting the Motion to Dismiss be granted. The well-founded dismissal should have been granted immediately as a matter of law.”

She noted that, “Sullivan even has the date wrong for Flynn’s mandamus petition. Sullivan entered his scheduling order after Flynn had filed for mandamus on May 19, 2020.:

Sullivan was also extremely wrong in his assertion “that Flynn was ‘convicted twice.’ Flynn was never convicted—no judgment was ever entered. Plea proceedings are void under D.C. Cir. law, and Flynn moved to withdraw his plea & dismiss his case—pending since January 2020.”

“Dismissal is required by every single Rule 48(a) case,” Powell wrote. “Every decision ever to address the issue has compelled granting dismissal on the government’s motion. Separation of powers demands it. No hearing is needed when the Government’s Motion is so documented.”

In early June seven senior Senators filed their own amicus brief with the U.S. Court of Appeals saying Sullivan’s actions against Flynn are a “recipe for tyranny.”

Shortly after, another 11 GOP House members did the same as the Senators. They filed their own amicus brief with the appellate court against Sullivan’s decision.

“[T]he powers of the Executive Branch are at their zenith when the Constitution’s grant of authority in Article II is seconded by statutes explicitly vesting power and authority in the Executive,” the lengthy filing submitted by the House reads. “That is emphatically the case here with respect to the power of the Executive Branch in general, and the Justice Department in particular under the direction of the Attorney General, to have the exclusive right and duty to exercise prosecutorial discretion and to control the prosecution of the case against this defendant.”