Feds recorded 33,000 calls of NYT contributor charged with being an Iranian foreign agent 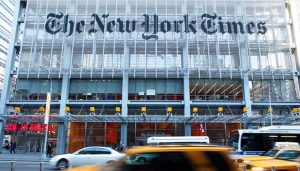 It doesn’t surprise me that there are Iranian sympathizers working as contributors at the New York Times. But I’m very concerned about the story of Times Contributor Kaveh Afrasiabi. He is facing federal criminal charges for allegedly being a foreign agent of Iran. We’ve written about his case beNew fore at SaraACarter.com. But there are some newly released facts that have really spiked my interest in this case.

I’m concerned about it on many levels. First and foremost, I’m worried that a possible foreign agent of Iran could have been brainwashing more Times liberal readers than we ever imagined. Secondly, I’m deeply troubled that the feds took 13 years to bring charges against Afrasiabi. According to reports, the federal agents literally recorded over 33,000 phone calls during those years, which means they were building a case against him for over a decade.

Afrasiabi is an opinion writer and the idea that the federal government could be listening into his calls for 13 years is really worrisome to me. I’m not saying Afrasiabi is innocent or guilty but I’m also on the phone quite a bit and many of my sources are foreign. It’s my job.

It makes me wonder how many writers, journalists and contributors may have their phones monitored if they are speaking to sources overseas. After reading so many stories about situations similar to Afrasiabi I’m just going to assume they are all being monitored, one way or another.

Granted we don’t know exactly what Afrasiabi’s calls were about. If he was an agent of Iran why wouldn’t they have brought charges against him in the first few years of listening to his phone calls.

According to the Department of Justice, “Afrasiabi allegedly sought to influence the American public and American policymakers for the benefit of his employer, the Iranian government, by disguising propaganda as objective policy analysis and expertise,” Acting U.S. Attorney DuCharme said.

Afrasiabi has a PhD and frequently publishes books and articles. He also appears on American television programs discussing foreign relations matters, particularly Iran’s relations with the United States, according to the Justice Department.

The U.S. Attorney’s Office now accuses him of pushing propaganda.

It’s all so slimy. But then again, Washington D.C. is a slimy town if you peel back all its pomp and circumstance.

I’m going to keep my eye on this story because in reality Afrasiabi could be anyone. What exactly did he do? Why did the feds listen to his calls for 13 years. It’s bizarre all the way around if you ask me.

Afrasiabi pleaded not guilty in February after being arrested at his Boston-area home, according to reports.

At an August 25 status hearing, a US attorney handling the case, Ian Richardson, said he was preparing to turn over 33,000 audio recordings of Afrasiabi. An August 27 letter said that in addition to the audio recordings, the government is turning over Internal Revenue Service, health insurance, and banking records. Afrasiabi told The Algemeiner in an email that the recordings are “the sum of all my phone calls over 13 years maybe even longer, I have better things to do than to listen to my own calls to my family, friends etc. A giant waste of time.”