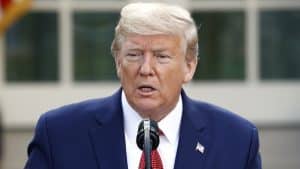 Lara Trump, former President Donald Trump‘s daughter-in-law, has claimed that Facebook removed her interview with him, with an email from the social media site saying any content “in the voice of Donald Trump” would be wiped from its platform.

Lara Trump, a recently hired Fox News contributor, on Tuesday published links to the 18-minute video of her talking with the former president in Palm Beach Gardens, Florida on several social media sites, such as Twitter and Instagram.

Early on Wednesday, Lara Trump posted to Instagram and Facebook a screenshot of an email warning that any content posted to both platforms “in the voice of President Trump is not currently allowed on our platforms (including new posts with President Trump speaking)” and said that it “will be removed if posted, resulting in additional limitations on accounts that posted it.”

“This guidance applies to all campaign accounts and Pages, including Team Trump, other campaign messaging vehicles on our platforms, and former surrogates,” the email stated. It also mentioned that “we removed content from Lara Trump’s Facebook Page that featured President Trump speaking,” saying that it was “in line with the block” on his Facebook and Instagram accounts.

Alongside the screenshot, Lara Trump wrote in a caption: “Just like that, we are one step closer to Orwell’s 1984. Wow.”

The email was also sent to other Trump officials, such as son Eric Trump, who posted screenshots to Instagram too.

A source from Facebook confirmed to this reporter that the email is either “real or similar.”

RELATED: Trump to return to social media on ‘his own platform’ in 2-3 months

After the January 6 riot in the U.S. Capitol, Facebook CEO Mark Zuckerberg decided to block then-President Trump “indefinitely,” saying that the commander-in-chief had used the platform to “incite violent insurrection against a democratically elected government”.

Leading up to and following the November presidential election, Trump used his social media to promote allegations of widespread election fraud.