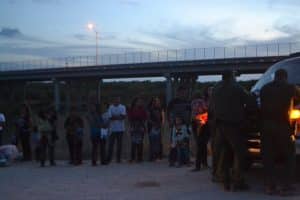 Upon first glance, postings on a Facebook “buy and sell” classified page in Central America appear as innocuous travel listings for trips from Guatemala to the United States. In fact, they are anything but innocuous.

These postings are operated by criminal human trafficking organizations, according to multiple sources who spoke to SaraACarter.com. Smuggling organizations use the social media platform to lure potential migrants, promising security, ‘special rates’ for those traveling with minor children and ‘financing’ to make the roughly 1,500 mile trek from Guatemala to the U.S. Mexico border.

Guatemalan officials noted that Facebook – as well as other major social media platforms – are used by traffickers to coordinate and reach larger groups of potential migrants.

Guatemalan authorities assured SaraACarter.com that they are working closely with U.S. counterparts. One senior Guatemalan official said , “social media presents a real challenge, since monitoring is out of the question due to respect for citizens privacy, and smugglers and organized crime are taking advantage of the social media platforms and privacy settings.”

Facebook was contacted Monday evening after this reporter was able to confirm the posts. By Tuesday afternoon, the social media giant took immediate swift action to remove the postings, adding that the company is reviewing the issue.

“We have disabled this profile and removed this post for violating our policies and continue to review this issue,” said Facebook spokesman Devon Kearns.

Although the posts are not targeted advertisements, the smugglers cleverly use pictures of New York City, Los Angeles, Statue of Liberty, among others, as a signal to migrants that their organization can coordinate the trip.  A number of posts promised food, medicine and vehicle transportation for the long journey. The smugglers also advertise ‘special rates’ for migrants traveling with children, according to the posts reviewed. The posts, which are intended for Spanish speakers in Central America, were translated from Spanish to English  by SaraACarter.com.

The ‘Buy and Sell’ Postings

For example, one post is for people living in the Guatemalan municipality of Santa Lucia Cotzumalguapa. The post promises migrants a “100 percent secure journey” to America.

“Don’t risk (the journey) with anyone, we have many years of experience and can guarantee a safe trip,” the posting states.

The posts were located in a ‘buy and sell’ listing known as Gangas Quiche, which allows people to purchase everything from used televisions, appliances, cars, homes and other products.

Smuggling organizations are much more sophisticated than they used to be, say U.S. officials.

The “coyotes” working for these illicit trafficking organizations keep hundreds of millions of dollars flowing to the cartels operating in the region.

The postings are used by the “coyotes to reach potential migrants and coordinate smuggling trips to the United States,” said one source, which asked for anonymity due to security concerns. “Coyote” is a term used to describe human smugglers in Central America and Mexico.

Illegal migrants can pay on average anywhere from $10,000 to $12,000 per person to be smuggled into the United States from Central America, according to ICE officials and Border Patrol agents.

Guatemalan officials say they are working to stem the flow of migrants to the United States. They warn that the challenge is difficult as the number of migrants has increased over the past year with large caravans of people arriving from Honduras and other parts of the world to make their way to the U.S. border.

Despite the challenges Guatemalan security forces are on the “lookout for smuggling rings and their leaders and Special Interest Aliens from other countries.”

‘Special Discounts’ For People Traveling With Minors And Financing

Minors traveling with adults has presented a looming crisis for the Trump administration. The illegal aliens, who are briefed by the smugglers on U.S. laws, advise those traveling to the U.S. border that traveling with underaged children will almost guarantee access into the United States.

It is a loophole that has allowed tens of thousands to be released into the country before they are required to appear before an immigration judge. After they are released, the illegal immigrants disappear into the fabric of America and rarely do they report back to immigration court.

It is a major reason why the smugglers post that they have ‘special rates’ for those traveling with children. It also puts the children in a precarious and dangerous position, as some children have been rented for the journey or are traveling with complete strangers.

“Whether you’re alone, or with someone familiar, we’ll finance your trip,” it states. “For those persons traveling with underaged children; (we have) special prices.”

Financing the dangerous trek to the U.S. border is extremely dangerous for migrants who may have to be in servitude to the cartels to pay off their loan once they arrive to the United States.

Women and children are the most vulnerable victims of these schemes.

A Border Patrol official, who works along the U.S. Mexico border in Texas, said “many are raped or abused on the journey. If they end up here illegally the smugglers still have control over them. It’s a vicious cycle.”

Under the 9th Circuit Court ruling, in what is known as the Flores Settlement Agreement, the law requires the release of family units, which means an illegal alien traveling with a minor. The family units, which are those traveling with minor children, cannot be held in detention facilities for more than 20 days. On average, however, it takes more than 45 days for the courts to hear detention cases and asylum pleas in immigration court. Family units are almost always released before they ever get to their immigration hearing and the majority never return to the courts once released.

“It’s easier for the illegals to enter the U.S. with minors — after they apply for asylum, we almost never turn them away- once they are processed they get released,” said an ICE official. “The cartels utilize this to their advantage.”

One of the classified postings warn that only people “Interested in the Trip. #No_Curios” should contact them.

A U.S. resident, who frequently travels to the region, said “it’s impossible to stop the (criminal organizations) from using social media. It has become a tool to coordinate. These advertisements are lies – promising safe passage and food. It’s not true at all.”

While SaraACarter.com was covering the second caravan wave in Guatemala at the Honduran border last year, migrants interviewed said told this reporter they first were informed of the caravan through local television media outlets, as well as various social media platforms.

This information comes at a time when President Trump – who has been working to stop the flow of illegal migrants to the United States – is threatening to bus those who enter illegally to sanctuary cities, while they await to appear before an immigration judge to determine their status.