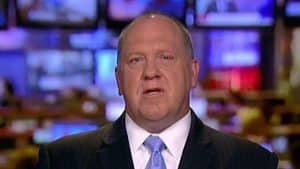 As the midterm approaches, along with the caravan of migrants from Central America and Mexico, the White House may authorize up to 15,000 troops to assist federal law enforcement agencies along the nearly 2,000-mile southern border with Mexico. This, according to current and former federal law enforcement officials, would send a message to future migrant groups and curb the flow of illicit drugs and contraband by narco-traffickers into the country.

The issue of “catch and release” whereby mainly family units are apprehended when they come into the country and later released pending immigration court proceedings, is a major loophole being exploited by illegal migrants trying to find ways to enter the United States, said former acting director of U.S. Immigration and Customs Enforcement Tom Homan, who is now a Fox News Contributor.

The caravan smugglers, the drug cartels are watching to see what we do

“The president’s response has to be strong, it has to be immediate and we have to catch them at the border and hold them at the border until they get through the court system,” Homan told SaraACarter.com. “The caravan smugglers, the drug cartels are watching to see what we do. If we catch and we release these caravans now, we can expect larger caravans in the near future. We cannot be held hostage by these groups.”

Currently, the Flores Settlement Agreement–a Ninth Circuit Court ruling–requires the release of family units, adults traveling with children, after 20 days. Homan noted that it takes much longer, usually 45 to 60 days, to get in front of a judge. The attorneys representing the immigrants already know the system is overburdened and immigration lawyers work to appeal the cases over and over again to elongate the immigrants stay in the country. Because the migrants know their stay in a holding facility is short “they wait out the 20 days until they are released into the country awaiting a court date that they usually never show up to,” said an ICE officer in Texas, who asked that his name not be revealed due to the nature of his work.

It is an increase of more than 620% in just 5 years, according to the statistics.

A way of mitigating that problem, says Homan, is providing detention facilities that would house the migrants like the “tent cities” currently being proposed by Trump.

“The minute that decision came down from the Ninth Circuit Court we saw an onslaught of families coming,” Homan added. “They will not show up in court and disappear. The Ninth Circuit really tied our hands.”

In an interview with Fox New’s Laura Ingram, Trump said migrants applying for asylum would be held in tent cities until their asylum case can be heard by the courts.

Homan, along with other ICE officers and Border Patrol agents who spoke to this news site, also noted multiple factors that have contributed to the overwhelming problems with the U.S. immigration system when dealing with illegal immigrants crossing the southern border.

For example, they noted the Trafficking Victims Protections Reauthorization Act (TVPRA) usually results in the swift U.S. resettlement of all illegal migrants under the age of 18, also known as unaccompanied alien minors (UAC).

Under the act, the minors are transferred to the Department of Health and Human Services and then eventually released to a sponsor, usually a parent, but a relative can suffice.

As a result of the lax rules,  Customs and Border Protection noted an increase in the number of minors entering the U.S. For example, Border Patrol agents apprehended 18,622 minors in 2010 but by 2018, those apprehensions skyrocketed to 50,036, an increase of 169% in just 8 years, according to CBP statistics.

On a recent trip to Guatemala, this news agency was informed that during the second caravan wave, seven unaccompanied minors were rescued and removed from people posing as a relative, most of the seven were under the age of ten, according to senior Guatemalan officials.

In some cases, the minors are trafficked by smuggling rings or sometimes “rented” by illegal immigrant smuggling rings trying to get their group into the U.S. by having them pose as parents of the minors they are traveling with to cross the border, said Homan and several ICE officers.

Some of these kids are rented out, used by the smugglers to get people across the border and into the country

“Some of these kids are rented out, used by the smugglers to get people across the border and into the country,” said and ICE official, who works along the U.S. Mexico border. “These children are in danger and we don’t know how many times this has happened where we weren’t aware of it. There’s also a problem when pre-asylum screeners almost always granting ‘credible fear’ to almost anyone with any story.”

Making matters difficult, say ICE officials, is that 90 percent of asylum seekers easily pass the first step when claiming “credible fear,” citing danger to their lives if they return home, according to reports. However, that first step doesn’t always work and they still need to go through the judicial system where almost always, the judge doesn’t find they meet the criteria that they are seeking asylum for “political, religious or other extraordinary circumstances,” said Homan.

But, with these credible fear cases, despite 90 percent passing their original screening, only 20 percent of the people are actually granted asylum, according to reports and Homan.