DOJ To Nadler: ‘Congress may not constitutionally compel the President’s senior advisors to testify’ 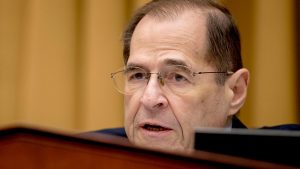 The Department of Justice issued a memorandum to President Donald Trump’s legal counsel Monday stating that “Congress may not constitutionally compel the President’s senior advisors to testify about their official duties.”

The DOJ’s eight page memorandum, written by Assistant Attorney General Steve Engel, clearly argues the separation of powers and states that “Congress could not lawfully exercise any inherent contempt authority against Mr. McGahn for asserting immunity. The constitutional separation of powers bars Congress from exercising its inherent contempt power in the face of a presidential assertion of executive privilege.”

Last week, Judiciary Committee chairman Rep. Jerrold Nadler, D-NY, threatened he was prepared to have his panel vote to hold McGahn in contempt of Congress if did not appear before the committee on Tuesday. It would be a contempt citation and could result in the House turning to a federal court to try to enforce its subpoena but the memorandum makes clear that there is a separation of powers issue that must be considered.

“We provide the same answer that the Department of Justice has repeatedly provided for nearly five decades: Congress may not constitutionally compel the President’s senior advisors to testify about their official duties.”

“This testimonial immunity is rooted int he constitutional separation of powers and derives from the President’s independence from Congress,” the memoradum states.

The memo referred to former Attorney General Janet Reno, who worked under President Bill Clinton. She stated that “subjecting a senior presidential advisor to the congressional subpoena power would be akin to requiring the President himself to appear before Congress on matters relating to the performance of his constitutionally assigned executive function.”

Questions and Answers Regarding “Testimonial Immunity before Congress of the Former Counsel to the President” As Per Department of Justice.

Question: Can Congress compel former Counsel to the President, Don McGahn II, to testify about matters described in the Mueller report?

Conclusion:  No. “The immunity of the President’s immediate advisers from compelled congressional testimony on matters related to their official responsibilities has long been recognized and arises from the fundamental workings of the separation of powers.  Those principles apply to the former White House Counsel.  Accordingly, Mr. McGahn is not legally required to appear and testify about matters related to his official duties as Counsel to the President.”

This OLC opinion is based on nearly 50 years of bi-partisan precedent:

Both Republican and Democrat Administrations invoked this protection:

Constitutionally-enshrined separations of powers prohibit Congress from forcing the President and his advisors to testify: