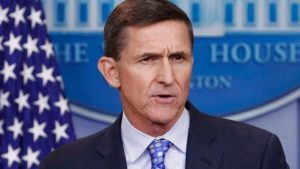 Yes, it’s true and in the prosecutor’s own words: Government prosecutors said in their filing they want “to make certain and clear that counsel [Covington & Burling] may take the necessary steps to vindicate their public reputation by addressing and defending against the defendant’s claims of ineffective assistance of counsel, and equally to vindicate the integrity of this Court’s previous proceedings, the government asks this court to issue the attached proposed order.”

Really? Now the US Attorney for the District of Columbia and the Department of Justice are in the business of protecting and working to protect the “public reputation” of Covington & Burling—a well-known international law firm based in DC?  Do the new United States Attorney Timothy Shea and Attorney General William Barr know that federal prosecutors—who had already identified a serious conflict of interest held by Covington in the Flynn case—are subjecting Flynn to more proceedings now to protect Covington?

Supplemental Motion filed by Sidney Powell describing the conflict of interest regarding Covington & Burling along with exhibits.

A serious conflict of interest—indisputable because it was recognized by both the government and Covington by November 1, 2017—well before Flynn entered a guilty plea or even made a proffer to the prosecutors– is one of the main reasons Flynn’s lawyer Sidney Powell filed to withdraw his guilty plea several weeks ago. She noted in her filing then that his former lawyers failed to advise him timely, fully or properly of the firm’s ‘conflict of interest in his case’ regarding the Foreign Agents Registration Act form it filed on his behalf, and by doing so “betrayed Mr. Flynn.”

In fact, there was no dispute that Covington had a serious conflict and it was so serious that the government raised it with Covington twice, beginning November 1, 2019, as reported.

A spokesman for Covington & Burling stated in an email to SaraACarter.com after Powell filed her motion to withdraw Flynn’s guilty plea that “Under the bar rules, we are limited in our ability to respond publicly even to allegations of this nature, absent the client’s consent or a court order.”

Well, with government prosecutors fighting on their behalf, Covington & Burling can be rest assured they are not alone.

Prosecutors also argued in Sunday’s filing that Flynn’s former attorneys must now testify after he claimed that they failed to appropriately handle his case. The prosecutors asked Sullivan to confirm by court order that Flynn had waived his attorney-client privileges in his communications with his lawyers, then-Robert Kelner, Brian Smith and Steven Anthony.

“The government requests that the Court suspend the current briefing schedule concerning the defendant’s [motion] until such time as the government has been able to confer with Covington regarding the information it seeks,” stated the prosecutors. “While Covington has indicated a willingness to comply with this request, it has understandably declined to do so in the absence of a Court order confirming the waiver of attorney-client privilege.”  Obviously, the government and Covington have already been communicating.  One wonders who even drafted the motion and how much help Covington provided on it?

Flynn is like David and the DOJ prosecutors are his Goliath—add now the formal and clear opposition of his own former lawyers—the powerful firm headed by former Attorney General Eric Holder and former head of Homeland Security Michael Chertoff.

Powell argues that point and others in her motion to withdraw his plea, in which she skillfully lays out how the government threatened to drag in his son, Michael Flynn Jr., during former Special Counsel Robert Mueller’s investigation, if he didn’t plead guilty to the one count of lying to the FBI and how, once the Special Prosecutors focused on FARA liability, Covington was either going to be a defendant or had to subscribe to the “Flynn-lied-to-his-lawyers” theory of the prosecution.

Again, it’s another way prosecutors can squeeze defendants into a guilty plea.

Powell told this reporter: “The government, at a minimum, should agree to allow Flynn to withdraw his plea. Both the prosecution and Covington recognized the seriousness of the firm’s conflict of interest. The only person who didn’t understand it all was General Flynn himself. As Flynn’s filing indicates, Covington did not timely or fully or accurately advise him of the situation. When he did finally make it clear to (Covington) that he must consult other counsel, he contacted me. The resulting change in his defense proves the point.”

But to put this into perspective one only needs to remember the sequence of events that led to Flynn’s guilty plea. He pled guilty to one count of lying to the two FBI agents who interviewed him only a few days into his new job as National Security Advisor in the White House regarding the content of his phone conversation with former Russian Ambassador to the United States Sergey Kislyak, while Flynn was on vacation in late December in the Dominican Republic.

Unbelievably, Flynn, who has given more than 33 years of his life serving his country in the military is in the fight for his future, family and reputation. But what about the two agents who originally interviewed him at the White House. Those agents, FBI Special Agent Peter Strzok and Joe Pientka, are now front and center of an ongoing criminal probe by Barr appointed prosecutor John Durham. Durham is investigating the extraordinary malfeasance in FBI’s handling the Russia probe.

Strzok has since been fired for his actions in the FBI’s probe into the President Donald Trump’s 2016 campaign and Pientka, who is still with the FBI, was highly criticized in Inspector General Michael Horowitz’s recent report for failing to verify the information contained in the now debunked dossier compiled by former British spy Christopher Steele.  Flynn has also raised serious issues about all of the exculpatory evidence that was hidden from him by Special Counsel prosecutor Brandon Van Grack who has just been dropped from the pleadings in this case.

Even fired former FBI Director James Comey admitted that the agents didn’t believe Flynn had lied to them during their interview with him and now Powell can’t get her hands on Flynn’s first interview with those agents–known as a 302 report. The prosecutors have told Powell that they do not possess the first 302 report and the FBI refuses to give it up despite repeated requests.

Comey also laughed about how he – along with his FBI cohorts – set up Flynn up for the interview that took place at the White House on January, 24, 2017. Comey described to MSNBC’s Nicolle Wallace that he sent Strzok and Pientka to the White House in a way that would not have occurred under another president. He said the interview wasn’t set up through the White House counsel’s office, as common practice, but arranged directly with Flynn. He admitted that it was “something I probably wouldn’t have done or maybe gotten away with in a more … organized administration,” Comey boasted as the audience erupted in laughter.

More and more, it becomes obvious through Flynn’s case the egregious behavior of government prosecutors that limits a defendants ability to have the necessary tools to defend themselves before the court.

It’s time for DOJ to create a Conviction Integrity Review Unit—like some state prosecutors have formed—to review serious claims that prosecutors have hidden exculpatory evidence and engaged in other misconduct and strong-armed tactics to secure convictions at any cost.

As Powell argued in a recent motion stating that the prosecution has “shown abject bad faith in pure retaliation against Mr. Flynn since he retained new counsel. This can only be because with new, unconflicted counsel, Mr. Flynn refused to lie for the prosecution.”

Powell is referring to the case of Flynn’s former business partner Bijan Rafiekian, who worked with him at his former security firm the Flynn Intel Group, as previously reported.  Last summer, prosecutor Van Grack and others in the Eastern District of Virginia suddenly demanded that Flynn admit to allegations that he said was not true.  In Powell’s motion, she attached the redlined document emailed by Mr. Van Grack that proved her point.

“Justice is not a game, and there should be no room for such gamesmanship in the Department of Justice,” stated Powell in her filing. She noted that the Justice Department is attempting to “rewrite history” and criticized the prosecutors’  withdrawal of its recommendation that Flynn be sentenced to probation and by suggesting he had not been forthcoming or cooperative.  She also argued that the government’s retraction of its prior recommendation and withdrawal of a prior motion placed the government in breach of Flynn’s plea agreement and warrants withdrawal of his plea by itself.

“Michael T. Flynn is innocent,” she noted. “Mr. Flynn has cooperated with the government in good faith for two years. He gave the prosecution his full cooperation.”

Now it remains to be seen what happens from here and when, and if, the scales of liberty will eventually be balanced.  Will the Department actually seek Justice now?  Flynn certainly hasn’t seen any yet. Ms. Ballantine’s most recent motion makes no mention of seeking the truth. Remarkably, its primary point is to protect Covington & Burling.