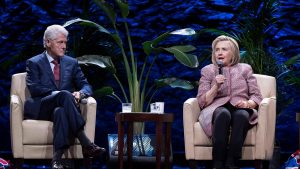 A trove of documents on the Clinton Foundation alleging possible pay for play and tax evasion have been turned over to the FBI and IRS by several investigative whistleblowers, who will be testifying in an open hearing before the House Oversight and Government Reform Committee Thursday, according to the committee and lawmakers.

Roughly 6,000 documents that are expected to reveal the nearly two-year investigation by the whistleblowers with a private firm called MDA Analytics LLC, which allegedly turned over the documents more than a year and a half ago to the IRS, according to John Solomon, who first published the report last week in The Hill.

allegations (whistleblowers) make are quite explosive

The whistleblowers are former federal criminal investigators, who allege that the Clinton Foundation was “engaged in illegal activities and may be liable for millions of dollars in delinquent taxes and penalties,” according to Solomon.

The Department of Justice and the FBI’s Little Rock, Ark. field office, which is believed to be investigating the foundation, have allegedly obtained the documentation from the whistleblowers as well, according to lawmakers who’ve spoken with the whistleblowers.

Clinton Foundation officials could not be immediately reached for comment.

However, a former whistleblower, who has spoken with agents from the Little Rock FBI field office last year and worked for years as an undercover informant collecting information on Russia’s nuclear energy industry for the bureau, noted his enormous frustration with the DOJ and FBI. He describes as a two-tiered justice system that failed to actively investigate the information he provided years ago on the Clinton Foundation and Russia’s dangerous meddling with the U.S. nuclear industry and energy industry during the Obama administration.

William D. Campbell’s story was first published by this reporter in 2017. He turned over more than 5,000 documents and detailed daily briefs to the bureau when he served as a confidential informant reporting on Russia’s nuclear giant Rosatom. Campbell worked as an energy consultant, gaining the trust of Russians and providing significant insight into Russia’s strategic plans to gain global dominance in the uranium industry. He reported on Russian’s intentions to build a closer relationship with Obama administration officials, to include then-Secretary of State Hillary Clinton, as reported. The documents he turned over to the DOJ, which were reviewed by this news site, showed Campbell had also provided highly sensitive information both related to the uranium case, as well as other intelligence matters, since 2006.

Special Counsel Robert Mueller was the director of the FBI at the time Campbell was a confidential informant and according to Campbell, the information was briefed to Mueller by his FBI handlers.

“(Mueller) received the documents, copies of which I still have, over a period of years and ignored a national security threat to the United States because of his political preference,” said Campbell, who said he is frustrated that the investigation into the Clinton Foundation and the other information he provided was apparently ignored years ago.

“These men were in charge of transport of nuclear materials (inside the United States) while committing criminal activity here in the United States and signing major US utility contracts,” said Campbell, referring to the information he provided the FBI on the American company Transportation Logistics International, also known as TLI, was the primary transport company for Russian enriched uranium sold to the United States.

“One teacup of what they were transporting both domestically and abroad could close down Wall Street or Washington,” Campbell warned. “(Mueller) ignored and delayed their arrests over years while I was risking my life undercover and interacting with these (Vladimir) Putin appointees both here in the United States and overseas.”

But Rep. Mark Meadows, chairman of the Freedom Caucus and member of the committee, said this time it will be different. He noted that the investigation is apparently ongoing with the FBI and DOJ and believes the information being delivered for Thursday’s hearing to be ‘explosive’ in nature and may help connect the dots.

Meadow’s told Fox New’s Martha MaCallum Tuesday, “the American people, they want to bring some closure, not just a few sound bites, here or there, so we’re going to be having a hearing this week, not only covering over some of those 6,000 pages that you’re talking about, but hearing directly from three whistleblowers that have actually spent the majority of the last two years investigating this.”

“We just look at the contributions. Now everybody’s focused on the contributions for the Clinton Foundation and what has happened just in the last year,” he said. “But if you look at it, it had a very strong rise, the minute she was selected as secretary of state. It dipped down when she was no longer there.”

“And then rose again, when she decided to run for president. So there are all kinds of allegations of pay-to-play and that kind of thing,” Meadows added.