Burgess Owens: I protested segregation while Biden fought for it 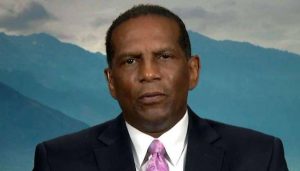 Former Oakland Raiders Super Bowl star and Republican candidate for Congress Burgess Owens slammed Joe Biden in a statement Sunday for telling black voters that if they can’t decide who to vote for in the 2020 presidential election, ‘then, you ain’t black.’

“I held picket signs and protested segregation, while Joe Biden fought for it,” Owens, who’s running in Utah’s fourth congressional district, said. “I will proudly support Trump, let’s see him tell me to my face I’m not black.”

Biden later said he regretted his statement to black voters calling it too “cavalier.”

Who would like to see @JoeBiden have a conversation with me about what he's done for/to the black community? pic.twitter.com/T1hd4CiAve

Biden’s attempts to sway black voters, however, conflict with his record in the Senate, which is now coming back to haunt him.

In 1977, he said that racial integration would cause his children to “grow up in a racial jungle,” according to The New York Times.

NEW: @USCGouldLaw prof @droithmayr spotted this 1977 Biden quote. He warns that unless there is "orderly integration" (he favored housing, not busing) "My children are going to grow up in a jungle, the jungle being a racial jungle . . " w/@AsteadWesley https://t.co/yQpjw0V2bN pic.twitter.com/7xPdtqjehB

The Times also reported that Biden was an opponent of court-ordered busing and earlier warned that it could result in a “race war.”

“You take people who aren’t racist, people who are good citizens, who believe in equal education and opportunity, and you stunt their children’s intellectual growth by busing them to an inferior school, and you’re going to fill them with hatred,” Biden said at the time.

In the 2020 presidential race, the issue resurfaced almost one year ago when Senator Kamala Harris brought his very past to the debate stage.

“I do not believe you are a racist and I agree with you when you commit yourself to the importance of finding common ground,” Harris told Biden. “But I also believe, and it is personal and It was actually very hurtful to hear you talk about the reputations of two United States Senators who built their reputations and career on the segregation of race in this country.”

Biden was also a lead voice in the Senate to push the 1994 crime bill that contributed to mass incarceration that disproportionally affected black Americans.